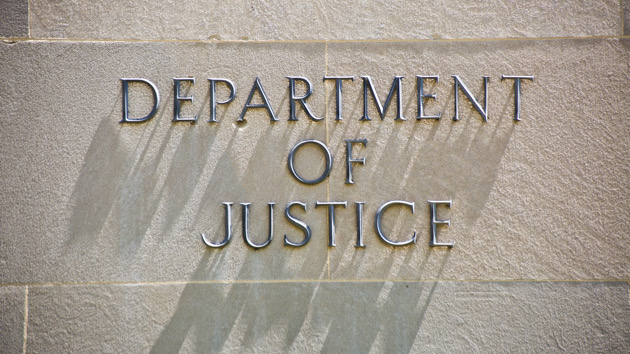 (WASHINGTON) — The Justice Department has announced nearly two dozen arrests of alleged fraudsters who prosecutors say have engaged in elaborate and brazen schemes to exploit the COVID-19 pandemic, raking in nearly $150 million in illicit proceeds so far.

In a TV network exclusive, officials told ABC News the enforcement action includes criminal charges against 21 individuals in nine federal districts across the country for their alleged participation in COVID-19 fraud schemes.

Losses from the alleged schemes top $149 million and counting, according to the Justice Department. Officials say the DOJ has so far seized more than $8 million in cash from the coordinated takedown.

“This COVID-19 health care fraud enforcement action involves extraordinary efforts to prosecute some of the largest and most wide-ranging pandemic frauds detected to date,” Director for COVID-19 Fraud Enforcement Kevin Chambers said in a statement. “The scale and complexity of the schemes prosecuted today illustrates the success of our unprecedented interagency effort to quickly investigate and prosecute those who abuse our critical health care programs.”

Behind the scenes, federal officials say they have quietly persevered to “root out” fraudsters in action and hold them accountable, leveraging an interagency approach.

“Today’s enforcement action reinforces our commitment to using all available tools to hold accountable medical professionals, corporate executives, and others who have placed greed above care during an unprecedented public health emergency,” Assistant Attorney General Kenneth Polite Jr. of the Justice Department’s Criminal Division said in a statement.

The alleged fraud varies widely, from accusations of exorbitant billing for sham telemedicine encounters, to COVID-19 testing allegedly used as bait to bundle with other unrelated and unnecessary testing services for the submission of false claims, to the large-scale manufacture of forged vaccination records. The Justice Department has charged individuals across eight states — California, New York, New Jersey, Florida, Washington, Maryland, Tennessee and Utah — in connection with the schemes over the past week.

In one such alleged scheme in California, two owners of a clinical laboratory, Imran Shams and Lourdes Navarro, have been charged with a health care fraud, kickback and money-laundering scheme aimed at defrauding Medicare of over $214 million for laboratory tests, including more than $125 million in false and fraudulent claims during the pandemic for COVID-19 and respiratory pathogen tests. No pleas have yet been entered in the case.

In two separate cases, one in Maryland and one in New York, owners of medical clinics allegedly obtained confidential information from patients seeking drive-through COVID-19 testing, submitting fraudulent claims for lengthy office visits that investigators say did not, in fact, occur.

According to the indictment, the profits from these false claims were then allegedly laundered through shell corporations in the U.S., transferred abroad, and used to buy real estate and other luxury items.

In another case, investigators allege that a postal worker in New Jersey made “thousands of dollars” on sales of more than 400 fake COVID-19 vaccination cards, and enabled others to resell and redistribute the cards she made — which she produced using a printer and ink at the postal office where she worked, according to an indictment unsealed Tuesday. The defendant, Lisa Hammell, allegedly sought to hide their electronic payment transactions by describing them as items like “movie tickets” or “dinner and drinks.”

Hammell, who was arrested Tuesday and does not currently have an attorney listed on her court docket, allegedly messaged an unidentified individual on March 27, 2021, showing off two fake cards she printed.

Through “deceit, craft, trickery, and dishonest means,” investigators say those they have now brought charges against “knowingly and intentionally” conspired to defraud the United States by impairing federal health authorities’ efforts to get shots in arms and beat back the spread of COVID-19. No further pleas have yet been entered.

In another unsealed indictment, investigators allege a Colorado man and unnamed co-conspirators made “hundreds” of fake vaccine records earning “thousands of dollars” from the scheme, selling fraudulent cards to “hundreds of individuals in at least a dozen states,” according to the indictment.

The man, Robert Van Camp, allegedly sold cards to at least four undercover law enforcement officers for between $120 and $175 per card, and claimed that he had sold fake cards to three unnamed Olympians and their coach.

“I’ve got people that are going to the Olympics in Tokyo, three Olympians and their coach in Tokyo, Amsterdam, Hawaii, Costa Rica, Honduras,” Van Camp told an undercover agent, according to the indictment.

Van Camp took care to customize the cards, according to a criminal affidavit, asking one undercover agent if they preferred any particular dates for when they purportedly got their shots — explaining if they were flying soon, airlines preferred the second dose to be administered at least a couple weeks before the flight. He allegedly asked if any of the individuals getting the fake cards were married, offering to make a partner’s card “look different from one another, so that the cards would not look like they came off an assembly line when they travelled together,” the filing said.

“My cards are f—ing worldwide,” Van Camp told one undercover agent, according to the affidavit. “I mean, these things are gold.”

As of Wednesday morning Van Camp has not entered a plea or retained an attorney in his case.

ABC News first reported last year on the burgeoning market for counterfeit COVID-19 vaccination cards, which had set off alarm bells for federal health officials, who warned the demand for fake proof of immunity was on the rise, threatening the nation’s hard-fought gains against the virus.

The illicit industry for forged cards hit its stride just as new vaccine requirements were put in place at the federal, state and local levels, and in both the public and private sectors — requiring proof of inoculation in order to work at a hospital, teach or attend school, work out at the gym, or eat inside a restaurant — yet some Americans held back, with some railing against the mandates.

For enterprising fraudsters, that hesitance posed a ripe opportunity.

One unnamed individual listed in the indictment allegedly privately messaged Hammell last summer: “Good morning, random question … can you get me a vaccine card? My mom works for [a hospital] and they are forcing everyone to get the vaccine and she definitely is adamantly against it.”

“I can as long as no one knows where it came from,” Hammell allegedly responded, according to the indictment.

Earlier this month, a naturopathic doctor in California who was arrested last year for allegedly scheming to sell fake COVID-19 immunizations and vaccination cards pleaded guilty — and is allegedly linked to the larger string of arrests announced by federal authorities Wednesday.

“The attempt to profit from the COVID-19 pandemic by targeting beneficiaries and stealing from federal health care programs is unconscionable,” Inspector General Christi Grimm of the Department of Health and Human Services (HHS) said in a statement Wednesday. “HHS-OIG is proud to work alongside our law enforcement partners at the federal and state level to ensure that bad actors who perpetrate egregious and harmful crimes are held accountable.”

Appraising fraudsters’ exploitation of the pandemic relief system this spring, top federal oversight officials warned members of Congress that the COVID-19 pandemic had created a “perfect storm” for fraudulent compensation claims, with a lack of proper oversight pairing with an unprecedented cash infusion to incentivize criminals amid a global crisis.

Criminal COVID-19 schemes have been an ongoing and thorny issue for the government to pursue, with the pandemic creating an avenue for fraudsters to supercharge their schemes. So far, the Justice Department has filed criminal charges against more than 1,000 defendants, opening more than 240 civil investigations into more than 1,800 individuals and entities, “together involving billions of dollars in suspected fraud,” OMB deputy director for management Jason Miller estimated in March.

But officials note that the current figures likely reflect only a fraction of the funds that experts believe may have been defrauded over the pandemic’s two plus years.

The ultimate amount of COVID-19 fraud will be “very large,” Justice Department Inspector General and Chair of the Pandemic Response Accountability Committee Michael Horowitz testified before the Senate Committee on Homeland Security and Governmental Affairs in March, adding that agencies would jointly use “all of our tools — criminal, civil administrative suspension and debarment, forfeiture, to try and recover the funds that have been stolen.”

“We’re doing that and we’re making every effort,” Horowitz said.