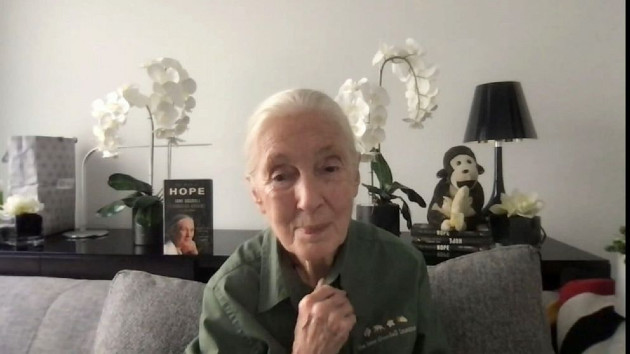 (NEW YORK) — After decades of work fighting to save African animals, Jane Goodall is turning her attention to the environmental and political impact left on technology.

The anthropologist spoke with ABC News’ Linsey Davis Tuesday about her recent partnership with Apple to encourage customers to recycle their devices. Goodall said reusing the metals and chemicals inside a phone, tablet or computer goes a long way to reduce peoples’ carbon footprint and will cut down on unnecessary mineral mining around the world.

Jackson, the former administrator for the U.S. Environmental Protection Agency, said that the tech company has been pushing to reduce its environmental waste through its recycling program and has seen some success.

Last year, 20% of materials in Apple devices were recycled materials, she said.

“We want to see that number continue to grow and the only way that happens is if users and customers bring back their devices at the end of their life,” Jackson said.

Goodall noted that one of the materials used in modern devices is coltan, and mining for the material has not only harmed the environment but also leads to deadly and unethical working conditions in places like the Democratic Republic of Congo.

“It’s underground tunnels [where] it’s dug. They’re not properly shored up. Children, basically, slaves are sent down in the tunnels. So many get killed,” she said.

Jackson pointed out that Apple ensures that the company is not using conflict minerals and dangerous supply lines in its products.

Apple is working with Goodall’s Roots and Shoots program, which works with young people in different communities to combat the climate crisis.

“What I love so much about Jane, Dr. Goodall, is that she challenges us every day to think more about the future, and she never lets us give up hope. Those two things together are the most powerful device, the most powerful thing we can do for the planet,” Jackson said.

Goodall echoed this message and encouraged people to stay hopeful for the planet.

“If you give nature a chance, it’s amazingly resilient,” she said.

Will Apple see a wave of unionization like Starbucks?

How robots could help solve the US recycling problem