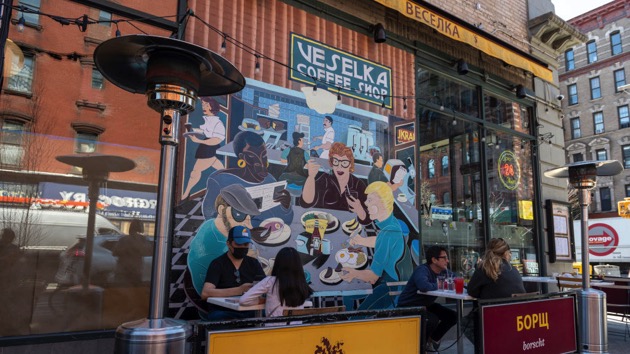 (NEW YORK) — Amid the Russian invasion of Ukraine and the resulting humanitarian crisis, U.S.-based businesses with ties to Ukraine have seen an influx of support from their local communities.

Restaurants like Veselka in New York City, which has served traditional Ukrainian fare since 1954 — from borscht to pierogis– are offering meals with a side of activism.

“We are deeply saddened by the events unfolding in Ukraine and incredibly appreciative of the outpouring of support for our Ukrainian community,” the restaurant wrote on its website. “100% of proceeds from every bowl of borscht in-store and take-out go to aiding efforts in Ukraine.”

The restaurant partnered with the Razom For Ukraine organization to handle all donations. Razom, which means “together” in Ukrainian, created a space for people to meet and collaborate on opportunities to both amplify Ukrainian voices in the U.S. and support Ukraine directly through individuals and organizations.

Two Boots Pizza also joined the effort creating two specialty pies — the Mr. Ze, made with kielbasa sausage from renowned butcher J. Baczynsky, and the Lesya, made with Veselka’s borscht and non-dairy cheese. Proceeds from the specialty slices will be donated to Razom for Ukraine.

“As the conflict in Ukraine unfolds, we have seen consumer searches for Ukrainian businesses soar on Yelp. In February 2022, searches increased 602% from January and were up over 2000% compared to February of 2021,” a spokesperson for Yelp told Good Morning America. “We’re seeing some first-party reviewers directly link their choice to visit a Ukrainian-owned establishment as an act of solidarity.”

Laika Cheesecakes and Espresso, a Ukrainian-owned bakery outside San Antonio, Texas, said it has raised over $100,000 in donations to assist Ukraine.

“We are donating ALL OF OUR SALES from the weekend not just profits,” the bakery said in a post on Instagram. “There were multiple reasons why we decided to do it this way. We thought it would be more transparent than counting profits since that can be interpreted differently. This was also so we could have people know they were helping as much as possible and that we were giving as much as possible.”

According to the bakery, the line was around the block over the weekend with about 3,000 people in attendance and a wait time of nearly three and a half hours.

“People still stayed to contribute-even when we had been completely sold out for hours,” the bakery said. “We sold over 4,500 pieces of cheesecake — jars and slices. Individual donations excluding the sales were over $25,000!”

Pushkin, a family-run, modern Ukrainian restaurant in San Francisco that serves traditional comfort foods like pelmeni and vareniki — little dumplings boiled and served with a big scoop of sour cream — hailed The Golden City’s residents for the influx of support.

The restaurant welcomed donations and held a bake sale over the weekend to raise money for humanitarian assistance in Ukraine. The team announced on Instagram that they collected $6,500 from the sold-out event and detailed how the money was directly donated to Nova Ukraine and Global Giving Ukraine’s Crisis Relief Fund.

Earlier this month, James Beard-nominated Gage & Tollner pastry chef Caroline Schiff joined forces with other New York City-based chefs to #cookforukraine with boxes of 12 sweet and savory pastries to support an array of nonprofits aiding Ukraine. Within days of launching their effort, she announced on Instagram that due to overwhelming interest and support, the pre-ordered boxes for pickup at the end of the month have already sold out, raising a total of $10,000.

Cookbook and culinary shop Now Serving in Los Angeles has also enlisted its community of bakers, pastry chefs, makers and restaurants to participate in a bake sale on March 12 to help Ukrainian children and families through UNICEF UK’s Ukraine Appeal.