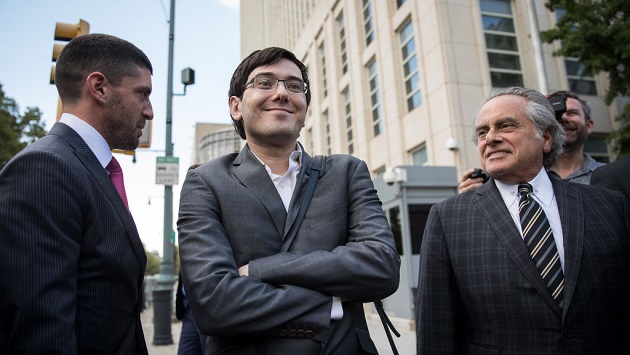 (NEW YORK) — Martin Shkreli, who was derided with the nickname “Pharma Bro” after he hiked the price of a lifesaving drug, and who flaunted his pricey purchase of a one-of-a-kind Wu Tang Clan album, is out of prison, his lawyer said Wednesday.

Shkreli had been convicted of securities fraud and other offenses and was sentenced to seven years in prison.

He was released Wednesday after serving about five years.

“I am pleased to report that Martin Shkreli has been released from Allenwood prison and transferred to a BOP halfway house after completing all programs that allowed for his prison sentence to be shortened. While in the halfway house I have encouraged Mr. Shkreli to make no further statement, nor will he or I have any additional comments at this time,” defense attorney Benjamin Brafman said in a statement provided to ABC News.

Shkreli earned widespread condemnation in 2015 when he raised the price of Daraprim — an anti-malaria medication often prescribed for HIV patients — by 4,000%. He also initiated a scheme to block the entry of generic drug competition so that his company, Turing Pharmaceuticals, could reap the profits from Daraprim sales for as long as possible, according to a federal judge that ruled earlier this year he should pay $64 million for his actions.

He was convicted of securities fraud in August 2017 in connection with his work at hedge funds MSMB Capital Management and MSMB Healthcare Management prior to founding Turing Pharmaceuticals. Shkreli, prosecutors said, used bogus information that defrauded investors in the hedge funds to pay back more than $10 million to disgruntled investors.

He had called the trial a “witch hunt” and blamed his increase in the cost of Daraprim for making him a target of federal investigators.

In addition to getting sentenced to seven years in prison for securities fraud, Shkreli was ordered to pay a $75,000 fine and $7.3 million in forfeiture.

Shkreli had unsuccessfully lobbied to be released from prison early on May 2020 after claiming his expertise could be used to find a cure for COVID-19.

IRS to commence tax season early, warns of potential hiccups due to pandemic and funding issues