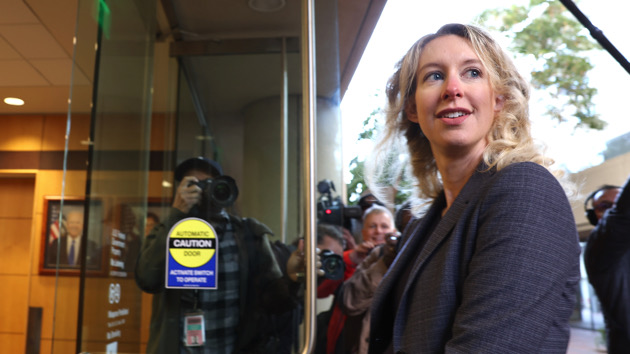 (SAN JOSE, Calif.) — Elizabeth Holmes, the founder of shuttered blood testing company Theranos, is set to be sentenced on Friday for defrauding investors.

The sentencing marks the latest development in a legal saga that has turned the former billionaire entrepreneur into an emblem of Silicon Valley malfeasance.

Holmes’ legal team requested no more than 18 months in prison in a court filing last week. In fact, a lighter sentence involving house arrest and community service would prove sufficient, her attorneys argued.

Prosecutors appealed for Holmes to be sentenced to 15 years in prison, calling it “one of the most substantial white collar offenses” in Silicon Valley history.

“She repeatedly chose lies, hype and the prospect of billions of dollars over patient safety and fair dealing with investors,” Assistant U.S. Attorney Robert Leach wrote in the request last Friday. “Elizabeth Holmes’ crimes were not failing, they were lying.”

Last week, Holmes’ legal team submitted 130 letters of support, including a note from personal friend Sen. Cory Booker, D-N.J., who said Holmes “has within her a sincere desire to help others, to be of meaningful service, and possesses the capacity to redeem herself.”

Regardless of the sentence, Holmes and her family will face ongoing hardship as a result of widespread criticism of Holmes, her legal team said. “[T]here is no avoiding the scorn that accompanies Elizabeth Holmes,” Billy Evans, her husband, said in the court filing.

Holmes, 38, was convicted in January on four counts of investor fraud and conspiracy while at the helm of Theranos. The verdict followed a four-month trial that detailed Holmes’ trajectory from a Stanford University dropout in 2003 to a star business leader on the cover of Fortune magazine little more than a decade later.

Ultimately, her downfall began in 2015 amid investigations from journalists and regulators over the medical company’s faulty product, which claimed to provide accurate information from tests using just a finger-prick of blood.

A year later, as the company struggled, Forbes downgraded its assessment of Holmes’ net worth from $4.5 billion to $0. Facing charges of massive fraud from the Securities and Exchange Commission, Holmes agreed to forfeit control of Theranos in 2018.

Since her conviction, Holmes has filed three unsuccessful requests for a new trial, citing freshly available evidence. She has remained free on bail. Holmes confirmed last week she is also pregnant.

The latest request for a new trial earlier this month centered on a visit to Holmes’ house by former Theranos lab director Adam Rosendorff. During the trial last year, Rosendorff testified for six days, saying that Holmes was aware the company’s product yielded inaccurate test results but still sought its continued use on patients.

Lawyers for Holmes argued that Rosendorff privately expressed guilt to Holmes over his depiction of the company during the trial. Ultimately, Rosendorff reaffirmed the veracity of his testimony and the judge dismissed the request for a new trial.

The sentence on Friday will be handed down by Judge Edward J. Davila at a federal courthouse in San Jose, California.

Balwani awaits sentencing after being convicted on 12 felony counts of fraud and conspiracy.

Earlier this month, he was granted a three-week delay in his sentencing hearing. He is now scheduled to be sentenced on Dec. 7.