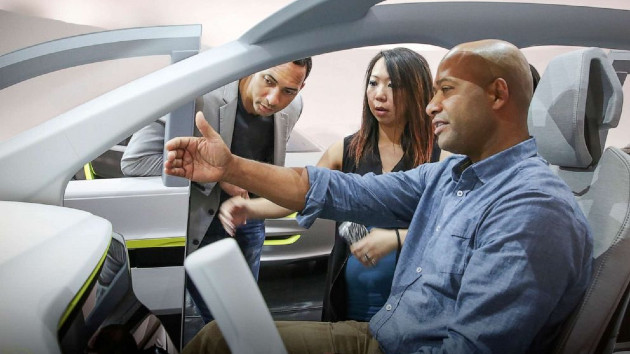 (NEW YORK) — You may not know Ralph Gilles by name but you may have owned (or admired) his cars: the Dodge Viper, Jeep Grand Cherokee and Ram truck, to name a few.

Gilles, the 52-year-old chief design officer of Stellantis, the automotive giant that owns the Chrysler, Peugeot and Fiat brands, has been sketching cars and trucks for more than 30 years. He started as a designer in 1992 and quickly climbed the ladder at Chrysler, becoming president and CEO of Dodge and the SRT Brand. He now oversees the Chrysler, Dodge, Jeep, Ram and Maserati marques, shaping future product and directing a large team of designers.

He has another mission at company: to make it more inclusive. Gilles, who is Black, serves as the executive sponsor of the Stellantis African Ancestry Network Diaspora (STAAND) and is active on the Stellantis Global Diversity Council.

The company announced last month that it was launching two new programs to attract diverse talent and train Black and multicultural employees for future leadership opportunities. Stellantis was also recognized as a top diversity leader by DiversityInc magazine.

In 2019, Black employees accounted for 17.2% of workers in automotive manufacturing, higher than the overall labor market, according to government data. But the industry lacked gender and racial diversity at the leadership level, the report from the U.S. International Trade Commission said.

“I think our industry doesn’t seem to attract people of color as much as others because it’s a little more of a clandestine thing that we do,” he said.

Gilles, an award-winning designer and industry visionary who continues to push the limits, spoke to ABC News about his trajectory in automotive, his attempts to hire more women and people of color and whether the Dodge Viper will return as an electric sports car.

The interview below has been edited and condensed for clarity:

What obstacles did you face as a Black man?

A: I didn’t face any impassable obstacles. If anything, my color made me stand out, sometimes for the better actually. I was a leader very young at my age; at 30 years old I was a director so [race] didn’t hold me back. It was quite the opposite if anything. I was very keen and aware that everything I did was being watched but in a good way. In every action I took I felt I would be representing an entire culture, not just myself. So that was something I was aware of from a very early stage.

Tell me how you’re trying to increase diversity at the company.

A: We’ve been trying to create a wonderful environment for people of color. I’ve been part of our business resource group [Stellantis African American Network Diaspora] for over 10 years and what I find fascinating about the group is that it went from being an internal support group to more of a recruiting device. When the Black Lives Matters stuff really lit up, our CEO at the time, Mr. [Mike] Manley, wanted to understand more so he called on the team to sit with him and that started this desire to create a diversity group. Just having these conversations has opened the minds of all of our execs [to] think about recruitment differently. Once you set up a tolerant place to work it naturally attracts people to the company.

How would you describe the makeup of the design team?

A: We have quite a bit of diversity in certain areas. Our infotainment team is pretty diverse. The exterior design team not as much. We’re finding though that the schools are not generating the pool that we need. We’re trying to get kids in middle school excited about this type of career and educate them about the possibilities and the outstanding life you can have as a designer or an engineer. So getting the word out there that it’s an awesome job is working slowly but surely.

What is the biggest change you’ve seen in the industry since you started?

A: When I started in the industry we were known as the Big 3. Today I laugh, it’s more like the Big 7 or 8. Every company seems to offer a full suite of vehicle types. The competition is really intense. The modern automobile is so technologically laden it’s hard just to call it a car anymore. It’s really rolling technology. And we are feeling more and more like a tech company.

We have software and coding people who are now attracted to the auto industry. The electrification movement, the infotainment movement, the autonomous movement — it’s getting more interesting. You look at it as a mature industry but it’s actually quite the opposite. It’s evolving more than ever.

What will move the needle on electric vehicle sales in the U.S.?

A: I think it’s a combination of more delicious offerings, which is what I am trying to do. To me it should be a choice. Have people say that’s the better, more attractive car. The current suite of EVs out there tend to be a little bit bland and uninspiring — great performing vehicles but not necessarily heart-pumping in the cultural or aesthetical sense. So trying to find a way to make them desirable and affordable. The other thing is going to be the infrastructure. Governments are working quite hard on helping the infrastructure catch up because it is a very different system from what we have today. So trying to make the pain points of owning an electric car go away is something everyone has to collaborate on. It’s not just a Stellantis problem. It’s a societal thing.

How would you respond to criticisms that Stellantis has been slow to produce EVs?

A: I think we’re not interested in just making an EV. We want to make the best EVs. We’re taking our time and developing them properly. We may not have one on offer today but it’s going to be coming very, very soon. We’re going to have several coming at the right time. A lot of the first EVs have very modest ranges that aren’t really solving the problem for the real consumer. So affordability, range, function — that’s what we’re putting in our calculus right now. We’re launching them in Europe. We’re leaders, we’re No. 1 in Europe. As a company we’re actually not laggards. We’ve been quite aggressive. We’re trying to match the society’s take rate.

How is designing an EV different from a gas-powered vehicle?

A: Some of the things we’re running into is trying to give the vehicle a personality. Trying to give it an emotional quotient. EVs don’t make a sound. Part of an excitement of a vehicle, especially with our Dodge brand, is the aural part of it. It’s something we’re intrigued about.

On the Jeep side, it’s creating an EV that looks futuristic but still capable. Aerodynamics are absolutely paramount. The EV gives us a benefit — we have frunks now. We have good packaging solutions. The center of gravity is in a good place. It’s more giving the car personality while balancing the needs of physics.

The Dodge Viper sports car was discontinued in 2017. Could it return as an EV?

A: I can’t talk about future product. I love that people talk about this nameplate so much. So that’s inspiring to us.

What is your daily driver?

A: I have a mixture of vintage cars because I do like the analog. I like to time warp back to the analog times. I have a Grand Cherokee, with a plug-in coming, and I steal my daughter’s [Alfa Romeo] Stelvio because I love that car. I have a few Alfa Romeos, a Lancia Delta and a cute little Peugeot 205 that I restored myself.

Looking back, is there one vehicle you would have tweaked before production?

A: (He laughs). OMG I need a couch now. Are you asking about my failures? (laughs again). I would have fought harder to make the wheelbase of the Chrysler 200 another 2 inches longer. Let’s put it that way.