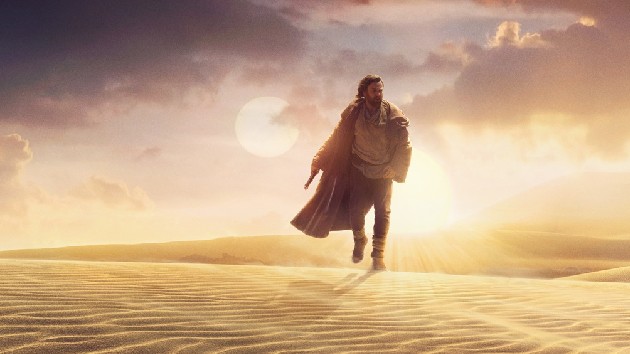 On an earnings call Wednesday, Disney CEO Bob Chapek revealed that Obi-Wan Kenobi, the newest small-screen Star Wars effort for Disney+, will debut on May 25.

The release date is most appropriate: May 25th is considered Star Wars Day by fans, commemorating the initial 1977 debut of George Lucas‘ original saga film.

A new poster for the series that debuted today reveals Ewan McGregor as the titular Jedi Master, walking alone in the sand dunes of Tatooine, apparently with Anakin’s old lightsaber in hand. With the twin suns of the desert planet setting behind him, he’s looking off to his left, possibly to an unseen threat.

The closing moments of Star Wars: Episode III — Revenge of the Sith showed Kenobi dropping off a newborn Luke Skywalker with his Uncle Owen and Aunt Beru on the Outer Rim planet, and promising Yoda that he’ll watch over Luke from afar while in exile.

As series director Deborah Chow hinted in a preview video, “It’s not safe. There’s Jedi hunters out there.”

For the uninitiated, after his Jedi purge seen in Episode III, The Emperor sends his minions throughout the galaxy to destroy any Jedi who managed to escape.

The most fearsome one of all, of course, is Kenobi’s fallen former student, Anakin Skywalker. While Kenobi thinks he’s dead after their climactic duel on the lava planet Mustafar, fans know that Skywalker-turned-Darth Vader survived, thanks to a fearsome black cybernetic suit.

Hayden Christensen is reprising that role in the series, the cast of which also includes Kumail Nanjiani, Rupert Friend, and Joel Edgerton and Bonnie Piesse, the latter two reprising their Star Wars prequel roles as Owen and Beru.

Not coincidentally, the final episode of The Book of Boba Fett also dropped today on the streaming service.