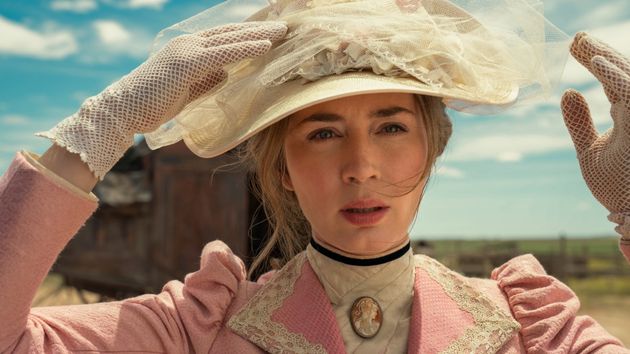 The new Western series The English, debuting today on Prime Video, looks to turn the genre on its head. It stars Chaske Spencer as an ex-cavalry scout, and Emily Blunt as an aristocratic English woman — the unlikely duo forced together by circumstance in the old west of the late 1800s.

Blunt, who now considers herself an expert horse rider, tells ABC she felt like she “was sort of holding on for dear life” in the beginning.

It was something she really focused on, explaining that people in the old West “were so at one with the horse…And so I just wanted it to look effortless.”

Blunt says she grew up on Westerns, thanks to her parents.

“…The first, I guess you could call it Western. Do you remember Old Yeller?…I was devastated by Old Yeller…And then my mom showed me Shane. And then I remember watching The Unforgiven…so I did grow up watching a lot of them.”

Spencer, a veteran of the Twilight films, jumped at playing a Native American as the show’s male lead –something you don’t see in most Westerns.

“[Those roles were] always reserved for Clint Eastwood or Paul Newman or Christopher Jones,” he says. “So this to me, it was an easy yes to participate in this in this project, because I’d never done this before.”

Which was the whole point of the show for creator Hugo Blick, who was looking to turn the genre on its head.

“So instead of Jimmy Stewart, we’ve got a woman of agency played by Emily Blunt,” he explains. “And then perhaps even more interestingly, [Spencer’s] archetype…is normally the preserve of your Eastwood [or] your Newman, is there being inhabited by Chaske Spencer.”