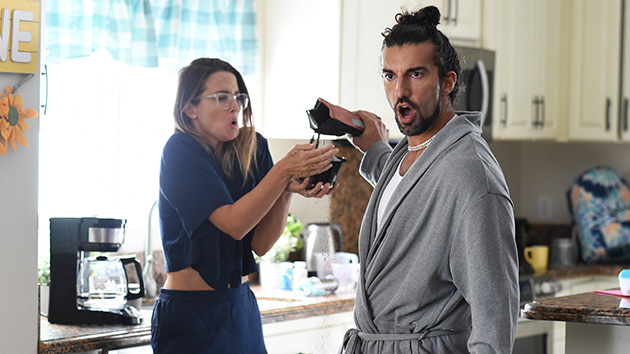 Justin Baldoni wears many hats. He’s an actor — gaining acclaim as Rafael on the Emmy-nominated Jane the Virgin — a best-selling author, podcaster, movie director and, now, a singer.

Baldoni, 37, stars in a new HP commercial, belting a back-to-school parody of Backstreet Boys‘ “Everybody (Backstreet’s Back).” When ABC Audio asked if he’s expanding his one-man empire into the music industry, he confessed that he doesn’t have the vocal chops.

“It’s called Auto Tune. And it was used in abundance when we made the song,” he laughed. “I’m man enough to admit that I can’t sing.”

The commercial is part of the #HPPaysYourPTA campaign, a virtual fundraiser to support Parent Teacher Associations across the country.  Parents are encouraged to share a video of them lip-syncing Baldoni’s song and use the hashtag to raise awareness for this new campaign.

Baldoni, who has a six-year-old daughter, hopes to inspire parents to help support their local PTA.

“If there’s one thing we learned during the pandemic…it’s how important teachers are,” he says. “Look at what our kids have gone through this year…Schools need our help and we need to get more involved.”

HP will donate up to $3 million to schools nationwide. PTA members can enroll online and will earn $10 per every HP Instant Ink sign up with their code. The five schools who fundraise the most will be awarded up to $2,000.

As for Baldoni, he says that while singing a BSB parody was a blast, he’ll stick to making movies.

“If [Backstreet is] listening, their people can call my people,” he cracked. “I might be available for their next tour, but I really got to check in with my team.”