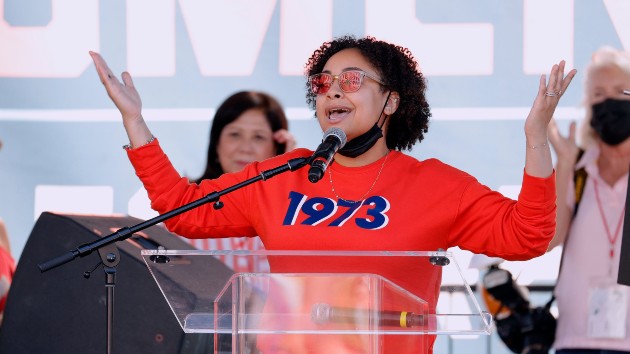 Jennifer Lawrence﻿,﻿ Amy Schumer﻿, Raven Symoné, Alyssa Milano, Rachel Lindsay, Debbie Allen and others participated in the fifth annual Women’s March over the weekend, which took place from Washington D.C. to Los Angeles to support women’s reproductive rights. Many say those rights are threatened not only by the Conservative-leaning Supreme Court scheduled to rule on an anti-abortion case this term, which begins today, but also by the recent Texas law that bans nearly all abortions after six weeks of pregnancy.

﻿Lawrence, who is pregnant with her first child, and Schumer attended the march in New York City. “I don’t have a uterus and she is pregnant but we out here @womensmarch @plannedparenthood #rallyforabortionjustice,” wrote Schumer, who shared a photo of the signs they brought to the rally. The actress and comic underwent a hysterectomy to treat endometriosis.

Milano shared to Instagram the speech she made at Washington D.C., where she lamented, “I am tired as a woman. I am so tired of having to continually prove that my body is my own.” She also called out the male politicians supporting anti-abortion legislation.

Symoné was photographed at the march in Los Angeles and told Hollywood Life that change only happens when enough people come together to fight for a common cause.

“Gay marriage wasn’t acceptable until everyone came together, and made noise, and made a stink about it and things changed, And now, I can get married. So, I believe that this form of activism can work and that’s why I’m here,” she said.