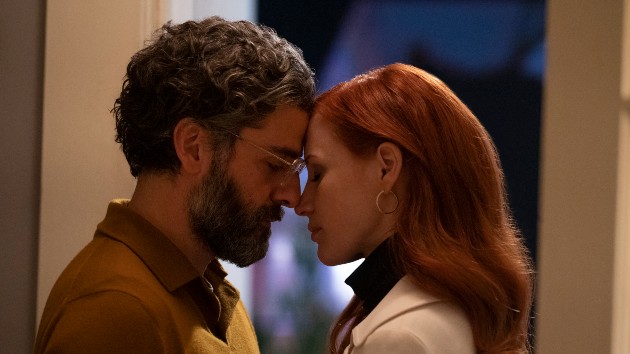 Jessica Chastain and Oscar Isaac are laughing off their viral red carpet interaction at the Venice Film Festival, where the internet collectively swooned over the Star Wars alum planting a tender kiss on Chastain’s arm.

The two were there to promote Scenes from a Marriage, an English-language remake of the critically acclaimed 1973 Swedish miniseries by Ingmar Bergman.

Speaking to ABC Audio, Chastain — who plays Mira — explained that she and Isaac first met in college and have remained great friends ever since.  However, she warns that their relationship people see in real life, or on the red carpet, will be a complete 180 in Scenes from a Marriage.

“In our day-to-day, we’re [a] romcom, silly, funny friendship,” the Golden Globe winner explained. “When we’re going to act [in this movie,] we’re really going to bring out the darkness.”

Scenes from a Marriage follows a marriage slowly falling apart. While it draws inspiration from its source material, creator Hagai Levi says his vision is not an exact replica of the original miniseries.

“I had this idea of the gender swap,” the director noted. “It immediately updated the whole thing just by doing [that].”

Isaac, who plays Jonathan, while affirming that he isn’t worried about being compared to the actor who originated his role, confessed that he lifted a few cues from Erland Josephson﻿, who played Johan in the 1973 version.

“Steal, steal, steal. That’s what I say,” Isaac grinned. “Steal anything you can if it makes it better!”

Scenes from a Marriage premieres on HBO on Sunday, September 12 at 9 p.m. ET.

Regé-Jean Page breaks his silence on filming ‘Bridgerton’s steamier scenes: “It was overwhelming”