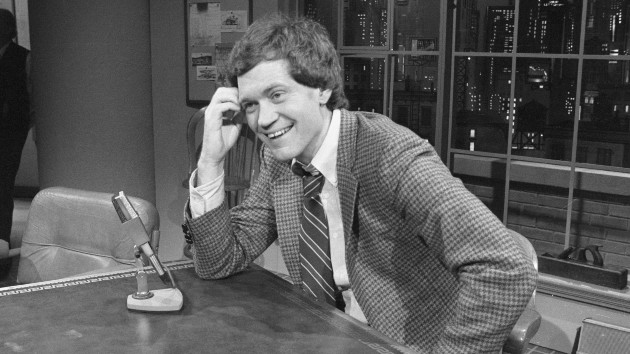 On February 1, 1982, Late Night with David Letterman premiered. The influential show brought the former stand-up comic and host of NBC’s Emmy-winning but little-seen The David Letterman Show to a new time slot, and late night TV was forever changed.

Letterman’s sarcastic style and love for the absurd were evident from the first episode, which showed footage of “metal being joined,” in response to “man on the street”-style requests. Letterman also gave a tour of NBC, to reveal a jungle-like green room, and a control hub in which Oktoberfest was being celebrated.

However, what most comes to mind from the first episode is Bill Murray‘s rambling, extended appearance as the show’s first guest.

Murray padded the show with a marathon interview segment, during which the Saturday Night Live and Stripes vet alternatively picked fights with, and showered love on, Letterman. Murray also showed footage of what he insisted was his new baby panda, and later performed Olivia Newton John‘s “Physical” as only Bill Murray could.

The show, which many comics have since cited as a major influence — including Letterman’s Late Night successors Conan O’Brien, and Seth Meyers — featured segments like “Stupid Pet Tricks,” and “Monkey Cam,” and absurdist stunts, like Dave’s Velcro suit and trampoline gag.

In 2013, Late Night and The Late Show with David Letterman were jointly ranked No. 41 on TV Guide’s “60 Best Series of All Time”.

Late Night with David Letterman won two Primetime Emmy Awards for Outstanding Writing for a Variety Series, and one Emmy for Directing in the Variety Series category.

Shaken and stirred: Monday night is “James Bond Night” on ‘Dancing with the Stars’