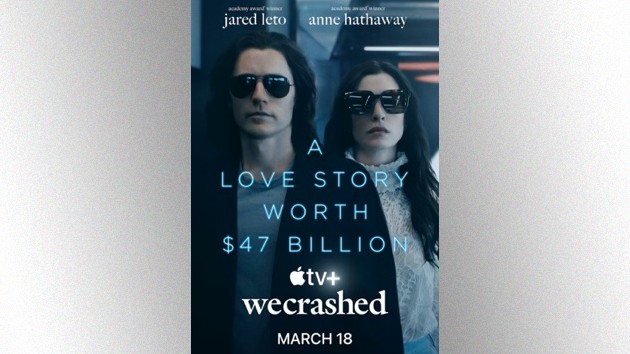 Based on the hit Wondery podcast WeCrashed: The Rise and Fall of WeWork, Leto plays Israeli entrepreneur Adam Neumann, who turned the office sharing company WeWork into a $47 billion empire — until its equally dramatic fall.

Hathaway plays Neumann’s wife, Rebekah, who helped him create his kingdom. “She helps him manifest things,” one character says in the trailer. Together, the power couple enjoy the trappings of their company’s fortune — lavish parties, private jets — and struggle as it eventually comes crashing down.

“You have to let them see…you’re a supernova,” Rebekah tells Adam.

“You’re afraid that he outshines you,” says America Ferrera as one of Rebekah’s friends. “Because he does.”

The streaming service teases, “WeCrashed is inspired by actual events — and the love story at the center of it all. WeWork grew from a single coworking space into a global brand worth $47 billion in under a decade. Then, in less than a year, its value plummeted. What happened?”

The first three episodes of WeCrashed: The Rise and Fall of WeWork, premiere on Apple TV+ on March 18, with new weekly installments of the eight-episode show dropping each Friday through April 22.