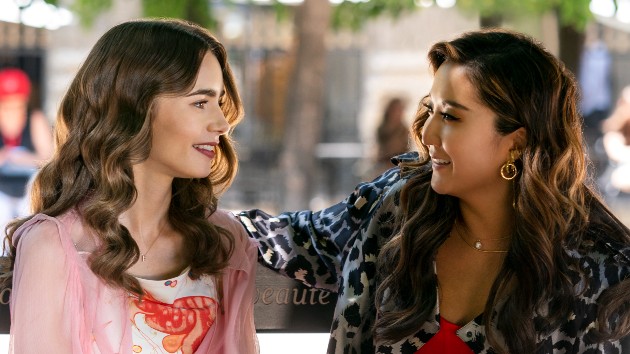 Star and producer Lily Collins returns as the titular character in the new second-season trailer for Netflix’s Emily in Paris.

This time around, she’s “looking for amour…and coming in haute,” according to the new footage of the Emmy and Golden Globe-nominated series. There’s break-up sex, fashion, and, of course, travelogue-worthy shots of the City of Lights.

The streaming service says, “Now more entrenched in her life in Paris, Emily’s getting better at navigating the city but still struggling with the idiosyncrasies of French life. After stumbling into a love triangle with her neighbor and her first real French friend, Emily is determined to focus on her work — which is getting more complicated by the day.”

Complicating her life further, is “a fellow expat” who “both infuriates and intrigues her.”

“You need to decide what you want, and not what’s gonna make everyone else happy!” advises Emily’s bestie, Mindy Chen, played by Ashley Park — and by the looks of things, it looks like Emily is taking her advice.

See how it all shakes out when the entire sophomore season of Emily in Paris drops December 22 on Netflix.

Train in vain: All aboard for season three of TNT’s ‘Snowpiercer’

In Brief: Netflix douses ‘Cooking with Paris’; Another awards win for ‘The Power of the Dog’, and more