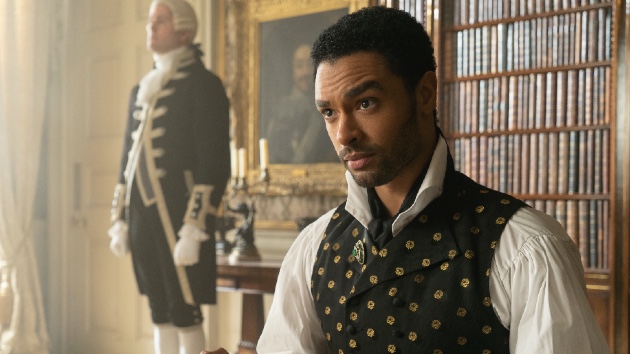 Breakout Bridgerton star Regé-Jean Page is finally offering his thoughts on the steamier scenes he had to film for the popular Netflix show.  The British-Zimbabwean actor admits he found them a bit “overwhelming.”

Speaking with The Hollywood Reporter on a roundtable featuring actors such as John Boyega and Chris Rock — Page broke his silence on the show’s now-famous “racier scenes.”

Apparently, the actor had to send warning texts to his family members who were excited to watch him on Bridgerton because, as fans know, things significantly heat up by the fourth and fifth episodes.

So, what did his family think when they binged the series and arrived at the now-iconic “I burn for you” moment?

“It was overwhelming.  I think people were looking to be overwhelmed,” the 31-year-old actor continued. “My family doesn’t want to be overwhelmed by my backside, specifically, too often, but they’ll take it on this occasion because everyone seems to be terribly happy.”

Page, who confirmed he will not be returning for Bridgerton’s second season, also expressed appreciation for the show’s diverse cast and that it featured Black individuals in positions of power instead of stereotypical roles.

“Where are our opportunities to spotlight Black joy, because otherwise you go into the past and you think that it’s Black folks’ job to suffer for a while, carry a moral for the white folks, and then we all move on,” remarked Page. “Finding opportunities for us to be splendid and spectacular and joyous and romantic was the theme of my involvement from the very beginning.”

Amanda Seyfried regrets filming nude scenes at 19: “I wanted to keep my job”

Rege-Jean Page on returning to ‘Bridgerton’, “We’re not gonna touch that”