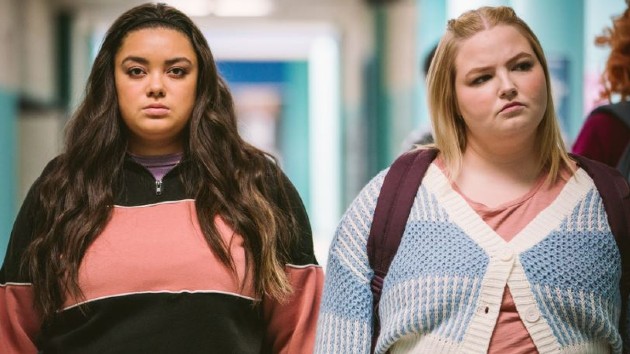 Actress and singer Samantha Aucoin tells ABC Audio that she “never even stepped on a TV set” before being cast in SyFy’s new supernatural series Astrid & Lilly Save the World, but fans clearly think producers made the right choice.

When the titular high school outcasts have had enough of the figurative monsters they deal with in high school, Aucoin’s Astrid and her BFF Lilly, played by Jana Morrison, attempt to put a hex on them.

However, the pair’s tinkering with the occult opens a portal, loosing literal monsters on their small town. Together, the very unlikely heroes have to put the creatures in their place, and in doing so, gain a confidence they’ve never had.

Aucoin admits, “We would have loved to have this kind of show on when we were in high school, because, you know, getting to see yourself in this sort of lead or…as a hero or a heroine, I mean, that would have been amazing.”

She adds, “For me…I think for anyone…I think high school is such an impressionable time, and when you don’t see yourself represented in the media, you know, that can take a toll on your mental health. It can be like…’Am I not thin enough? Do I not look the right way?"”

Aucoin notes, “To see people…just embracing the show and embracing, you know, the way we look, and to realize that it’s OK to look the way you look, and…you should love that, and you should love yourself.”

Meanwhile, Samantha admits to having one selfish goal for the show: Seeing Astrid & Lilly cosplayers. “That would be absolutely incredible!” she declares.

Astrid & Lilly Save the World airs Wednesday nights at 10 p.m. on SyFy.

Report says Jeremy Renner was trying to save nephew from snowplow; ‘Mayor of Kingstown’ co-star sounds off