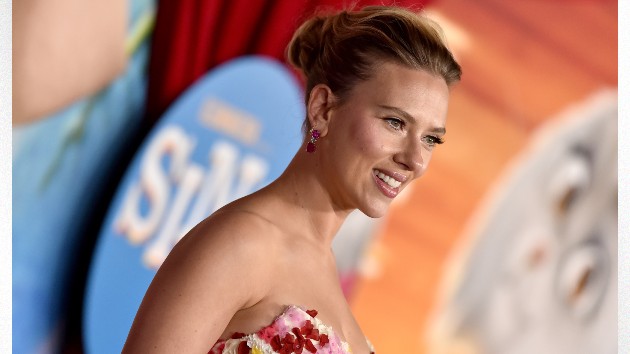 (NOTE LANGUAGE) In a conversation with Vanity Fair about her new skin-care line, The Outset, mom and Marvel movie star Scarlett Johansson explained what it’s like being a mother in the public eye.

Johansson, who last August welcomed baby son Cosmo with her husband, Saturday Night Live’s Colin Jost, also has a six-year-old daughter, Rose, with her ex-spouse, journalist Romain Dauriac. ScarJo admits to Vanity Fair that she was “so protective of both pregnancies, not wanting to feel scrutinized in the public eye.”

Indeed, her baby with Jost took even showbiz reporters by surprise, with Zoom-only promotional appearances for Black Widow making it easier to hide a baby bump than pre-pandemic in-person publicity appearances.

“I wanted to be able to have my own feelings about my changing body without other people also telling me how they saw me, whether it was positive or negative,” Scarlett said. “I realized when I was pregnant with my son, it’s funny how much stuff people put on you when you’re pregnant — their hopes or their judgment or their desire, a lot of that is put on pregnant women.”

Scarlett admits, “[W]hile I was definitely excited to be pregnant in some ways, I also had a lot of not-great feelings about it, and that would be scrutinized by — I’m talking about…women that were close to me.”

Scarlet says she “feels like a lot of things have moved forward in the past five years in terms of women’s empowerment, but that thing remains sort of in the Dark Ages. So much judgment, it’s crazy.”

Hugh Jackman denies steroid use, explains he has six months to bulk up for ‘Deadpool 3’