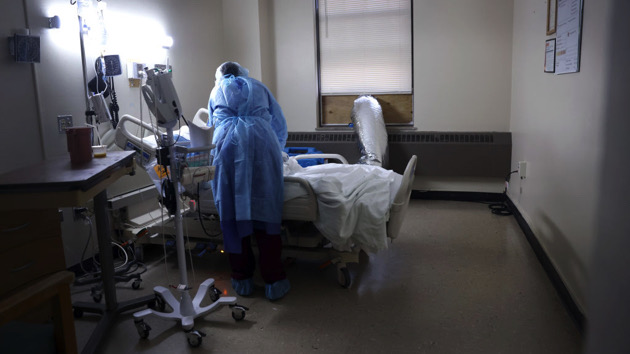 (CHICAGO) — Life expectancy in Chicago fell by nearly two years during the first year of the COVID-19 pandemic, in line with national trends, a new report finds.

The data, released Monday by Mayor Lori Lightfoot and the city’s Department of Public Health, showed Chicagoans had a life expectancy of 75.4 years in 2020, down from 77.3 years in 2019.

The figure is one of the steepest declines in life expectancy recorded in a single year for Chicago. What’s more, the sharpest drops were seen among communities of color, particularly Black and Hispanic residents.

“COVID has taken a terrible toll on the health and well-being of our city’s residents, particularly those who are Black and Latinx,” Lightfoot said in a statement. “Without formally acknowledging this detrimental impact, and its roots in structural racism, we will never be able to move forward as a city.”

The data showed that life expectancy for Black residents fell below 70 years for the first time in decades, with a drop from 71.8 years to 69.8 years. Additionally, the life expectancy gap between Black and white Chicagoans widened to 10 years, up from 8.8 years in 2017.

Although the COVID-19 pandemic was a significant driver of the Black-white life expectancy gap in 2020, it was only the second leading cause of death. According to officials, the main driver was chronic diseases, including heart disease, cancer and diabetes.

The city also saw sharp increases in deaths caused by homicides and accidents, including drug overdoses and car crashes.

Meanwhile, Hispanic residents saw the steepest drop of any racial/ethnic group from 79.1 years to 75.9 — a decrease of 3.2 years. The data also found that Asian/Pacific Islanders saw a life expectancy decline of two years while white residents saw a decrease of one year.

In addition, death rates increased from 2019 to 2020 for all races and ethnicities, with people of color making up a disproportionate number of deaths. Black residents only represent one-third of Chicago’s population but accounted for half of the city’s deaths.

Overall deaths in Chicago rose by 30%, according to the report. Officials recorded about 6,000 more deaths than predicted and approximately 4,000 of those were due to COVID-19.

CDPH said it is working to narrow the racial life expectancy gap through a program called Healthy Chicago 2025 to address the root causes of these disparities such as structural racism.

What’s more, 27% of Hispanic residents and 26% of Black residents said they missed urgent medical appointments while only 9% of white Chicagoans reported similar circumstances.

The statement continued, “Collectively, the City and its partners must do the work to fundamentally transform the conditions in which people live — by ending the pandemic and by addressing its impacts on access to services, housing, education, and economic opportunities, as well as people’s mental health.”

Neither the mayor’s office nor the CDPH immediately replied to ABC News’ request for comment.

More than 150,000 births could occur in the US every year following the reversal of Roe v. Wade, report predicts