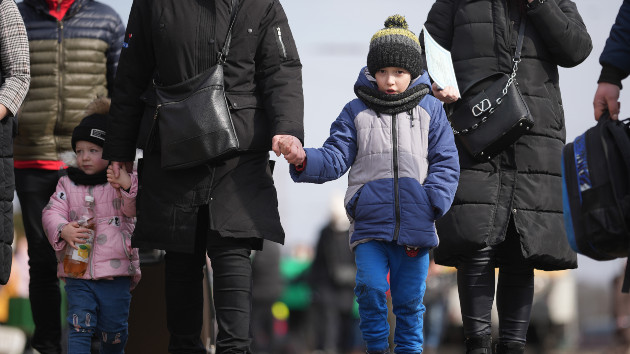 (NEW YORK) — As the Russian invasion of Ukraine intensifies, children are experiencing devastating consequences of being caught up in the war zone.

At least seven children have been killed, according to United Nations High Commissioner for Human Rights, and several more have been injured during air strikes and blasts.

Dozens of children are hiding in bomb shelters, basements, metro stations and other underground areas while others have fled their homes for neighboring countries.

Psychologists and other experts say there are also mental health concerns these children face and that it’s important they have as much structure as possible to keep a sense of stability in their lives.

And adults can better provide for their children by taking care of their own mental health needs.

“Children are extremely vulnerable to insecurity, not only the physical trauma but the psychological trauma, and it can reverberate and have repercussions for a long time,” Dr. Paul Wise, a professor of pediatrics at Stanford University, told ABC News.

There are physical risks for children that come with living in war zones, such as breathing in smoke and ash from fires and blasts that can affect the nose and lungs. But there are also mental health risks.

Studies have shown that children and families living in or fleeing war regions have an increased risk of suffering from mental health problems.

“We’ve seen past war situations like what is happening in Ukraine, an increase in depression, anxiety,” Dr. Monica Barreto, a clinical psychologist at Orlando Health Arnold Palmer Hospital for Children, told ABC News.

And while not all children will be traumatized, they may react differently to the traumatic situations they’re witnessing.

“Some children may be more agitated, they may be harder to calm down, just more unsettled,” said Dr. Jack Shonkoff, director for the Center of the Developing Child at Harvard University. “Some children in these circumstances tend to be more withdrawn, they’re not crying as much, they’re not demanding much attention.”

He continued, “Sometimes people might look at that and say, ‘This child is managing pretty well.’ Sometimes that’s a sign of the things to worry about the most because these children are withdrawing, they’re internalizing a lot of what’s going on.”

Shonkoff, who is also a professor of child health and development, said one way to ensure a good outcome for children in a war zone is by making sure the adults are being taken care of too.

“The most important factor that determines how children are going to basically survive and go forward after a war experience is the nature of the adults who are caring for them,” he said. “If the parents and the caregivers are significantly traumatized, they can’t provide that sense of support. The adults’ needs become critically important to protect the children.”

He likens it to a safety presentation on a flight, when flight attendants tell passengers to secure their own oxygen masks before helping others.

As for babies, he explained they are highly attuned to what’s going on and if adults are not engaging with them, it can hurt the babies’ development.

“If the parent is so traumatized or depressed, they can’t coo back, can’t smile back. That signals danger to the brain even though the baby doesn’t know what’s going on. That can create excessive stress in the body, raise inflammation and blood pressure levels,” Shonkoff said.

Wise adds that children look to adults not only for protection but also for how frightened they should be and “for understanding what’s happening to them in a time of profound insecurity, and children will feel the best protected with a strong, coherent community life and family life.”

Children need as much as structure as possible

The experts say it’s important to make sure that children are provided structure as much as possible while living in war zones to help with their development and well-being.

“Children are no longer in school, they’re no longer in a safe environment,” she said. “Maintaining some of that structure can be very helpful and protective during these times.”

Barreto added that the same recommendations apply for children in refugee camps, making sure they are set up with their families and that some time is provided so they can experience “normality” whether that is playtime or having lessons.