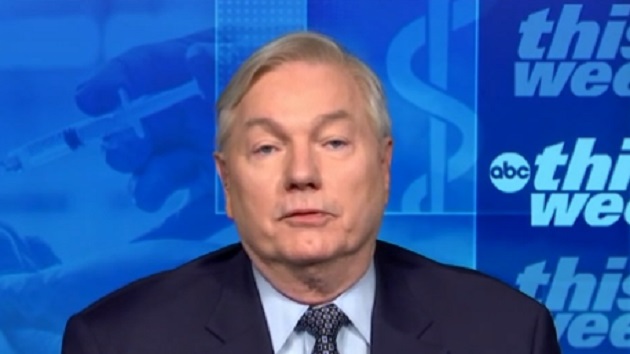 (WASHINGTON) — Dr. Michael Osterholm, director of the Center for Infectious Disease Research and Policy at the University of Minnesota, called the recent ruling by a Florida judge striking down the federal mask mandate on mass transit “a real challenge.”

“This is not going to be the last of the need for public health measures we’ve taken for any crisis,” Osterholm told “This Week” Co-Anchor Martha Raddatz exclusively on Sunday. “And what could be the crisis of tomorrow?”

The Transportation Security Administration announced last week that the travel mask requirement will no longer be enforced by the agency since the mandate was struck down. But the Department of Justice is appealing the decision after the Center for Disease Control weighed in.

“On precedence, this case is very, very important,” Osterholm added. “I think the confusion around the mask mandate itself and how effective it is, is a secondary issue, but one that is still important, too.”

Raddatz followed up, asking Osterholm about telling The New York Times this week that public health messaging around masking has been “way off the mark.”

“Well, it is off. First of all, let me be really clear, I am very, very strongly in support of a respiratory protection,” he said. “Someone can do a great deal to protect themselves and protect others if they’re using an N95 respirator. But this virus is transferred by what we call aerosols. It’s very fine particles that float into the air. It’s like smoke. It’s like perfume. And you have to have a high-quality respiratory protection device to protect yourself.”

“I think that what we want to do is stop talking about masking and talking about effective respiratory protection,” Osterholm added.

“And how do you do that?” Raddatz asked.

“First of all, the U.S. public is done with the pandemic, even though the virus is not done with us,” Osterholm responded. “And we have to recognize that in public health.”

“So, what is it that we can do? Well, we have to have credibility,” he added. “And again, what has happened is this has become … really a philosophical and political issue, not a science issue.”

Despite his objections to cloth masks, Osterholm still strongly recommends the use of N95 respirators, “particularly if you’re an immune-compromised individual.”

“If everybody can do that, they would keep in on to the duration of a flight, not wear it underneath their nose, then that would be a very effective way to have a mandate,” Osterholm said.

Raddatz also asked about the pandemic as cases rise in most states.

“What is the true state of the pandemic right now?” she pressed.

“You know, Martha, every day is a brand new day with this pandemic, relative to the variants,” Osterholm said. “We know that we have strains that are much more infectious, so that, you know, you can’t come up with an answer today to say this is where we’re at because tomorrow, it could change.”

Despite rising caseloads, hospitalizations stemming from the virus are still at all-time lows nationwide, something Osterholm called “good news.”

“But I want to emphasize that could all change tomorrow, and that’s what the public is not willing to hear,” he added. “They want this to be over.”