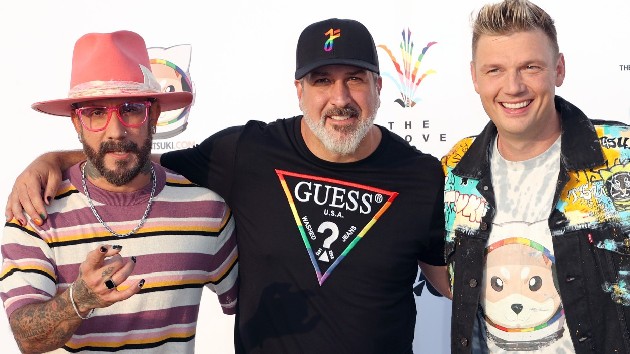 Tapping into people’s appetite for ’90s nostalgia, 90s Con 2022 is taking place next month in Hartford, Connecticut, and some of your favorite boy band members will be on hand for the occasion.

Backstreet Boys AJ McLean and Nick Carter and *NSYNC‘s Joey Fatone will appear during all three days of the con, which runs from March 11 through March 13.  All three guys will be part of a panel, and will be posing for photos and signing autographs separately and together.  If you want a selfie with all three together, it’ll cost you $175.  Selfies with each guy individually cost between $40 and $50.

Less than a month after the con, AJ and Nick will join the rest of the Backstreet Boys as they kick off their rescheduled DNA World Tour in Las Vegas on April 8.

In addition, Chilli and T-Boz from TLC will be attending the con, but only on the 12th and 13th.  They’ll also be available for autographs and selfies.

If you want even more ’90s nostalgia, 90s Con 2022 also will feature appearances by the cast of Full House, plus Joey Lawrence, Holly Marie Combs, Christopher Lloyd and the stars of Sabrina the Teenage Witch, Boy Meets World, Party of Five and Family Matters.

The Year in Music 2022: Adele craps out in Las Vegas, then hits the jackpot