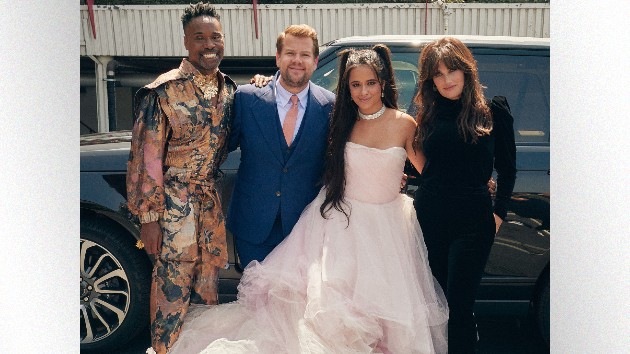 How nervous was Camila Cabello before her first date with Shawn Mendes? So nervous that she had to get drunk and sing a special song to build up her courage.

Camila appeared in the “Carpool Karaoke” segment of The Late Late Show with James Corden Wednesday night with her Cinderella co-stars Idina Menzel and Billy Porter, and revealed that “in preparation for dates” and “for life,” she would sing “Defying Gravity,” Idina’s big number from the Broadway show Wicked.

“I swear, before Shawn and I’s first date, I was so nervous, I took two tequila shots and sang ‘Defying Gravity’ over and over,” Camila admitted.  Explaining that while she and Shawn were friends at the time, they weren’t “together,” and there were a lot of “stakes” — including when they’d have their first kiss.

“So he’s about to come over and I’m, like, so nervous I just can’t take it,” Camila continued. “My dad is there and I’m like, ‘Pour me two tequila shots — just do it!’ and I sang ‘Defying Gravity!"”

Of course, James, Billy, Idina and Camila then burst into a rendition of the song, as the audience cheered wildly.

“Oh my God, if Shawn Mendes knew the second he walked in the door that that was happening….” James began.

Things seem to have worked out O.K. for the couple, though: They’ve been together for more than two years.