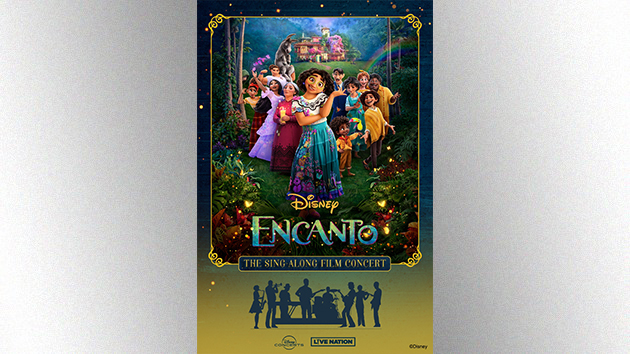 Courtesy of Disney and Live Nation

Parents, are you ready to talk about Bruno again?  If your kid is obsessed with Disney’s latest animated film, Encanto, its vibrant songs are hitting the road in a one-of-a-kind concert event.

Disney Concerts announced Tuesday it’s teamed with Live Nation for the upcoming Encanto: The Sing-Along Film Concert Tour, which begins this summer.  The tour starts in Ridgefield, Washington, on July 18 and spans 32 North American stops before coming to a close on August 28 in Chicago, Illinois. Other pit stops include Phoenix, Dallas, Tampa and other major American cities.

What makes this event unique is that concertgoers will be able to watch the Encanto movie, in full, on the venue’s gigantic screen.  While everyone is encouraged to sing along with the film’s original songs, an on-stage band will also provide live music to make the experience more immersive.

Encanto’s songs, which were written by Lin-Manuel Miranda, quickly took over social media, in particular the record-breaking “We Don’t Talk About Bruno,” which topped Billboard’s Hot 100 chart for five weeks — the longest #1 streak of any Disney song in history.  Other standout songs include Jessica Darrow‘s “Surface Pressure,” which peaked at number eight on the Hot 100 and sold over a million copies, and the Oscar-nominated track, “Dos Oruguitas.”

In addition, the Encanto soundtrack was the best-selling album in America for over a month, topping the Billboard 200 albums chart for five consecutive weeks.

Tickets for Encanto: The Sing-Along Film Concert Tour go on sale starting Friday, April 29th at 10am local time on Live Nation, which also lists the full schedule of dates.

Harry Styles helps fan come out during his concert

Rod Stewart to release video tribute to his dad, hold special concert in his honor

“It hit me hard”: Josh Groban recovering from COVID just in time for tour