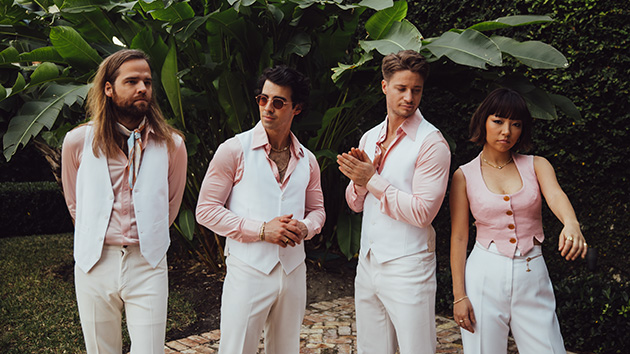 After a four-year wait, DNCE fans can finally watch an all-new music video from Joe Jonas‘ band.  They dropped their first new single “Dancing Feet” on Friday and, on Monday, followed up with its companion visual.

“Dancing Feet,” which features DJ Kygo, adopts a retro-vibe with the fashion the band rocks throughout the music video.  The quartet works for the ultra wealthy at The Palm Tree Resort and run errands all day, such as parking people’s cars, playing tennis with them and supplying the music for a raging party.  The group then blows off some steam from another hard day’s work by sneaking into an exclusive club and dancing the night away on a light up floor.

The single marks DNCE’s first since 2018 and Kygo’s first song of 2022.  As for why the two joined efforts on the funk-fueled collaboration, the band explained in a press release, “We first met Kygo when we did some shows together in 2016. We’re excited to collab with him for the first time on ‘Dancing Feet’ and share this song with the world and lean into our funk & disco influences.”

Kygo added in his own statement, “Joe and I met years ago in Las Vegas and have wanted to find the right song to work on together for a while” and said he knew “Dancing Feet” was “a special song” when he started working on it. He adds of shooting the song’s visual, “It was also great to have the chance to shoot a fun music video in Miami with DNCE and perform the song with them during Super Bowl weekend.”

“Dancing Feet” is available to stream and purchase now.