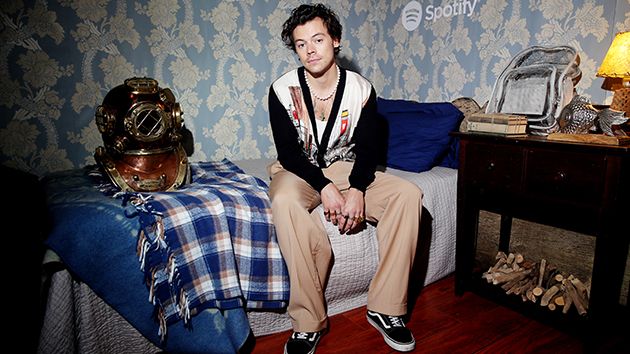 Is Harry Styles gearing up for his next music era?  The “Adore You” singer certainly has something up his sleeve after fans spotted him being filmed on a giant bed in front of Buckingham Palace.

British publication Daily Mail obtained photos of the bizarre session, during which Harry was seen lounging on an ornate and oversized metal bed while covered in blankets and surrounded by fluffy pillows.  Harry also was wearing a pink and green scarf that matched his painted nails, as well as brown and blue polka dot pajamas.

Observers also said Harry’s guitarist and drummer hopped onto the bed for a bit.

It’s unknown exactly what Harry was doing, but the Daily Mail notes he briefly clogged traffic as the bed was on was towed down the street and toward the palace, while the cameras rolled.

It remains to be seen whether all of this means new music’s on the way. Harry’s last album, Fine Line, came out in 2019.

Harry just wrapped the U.S. leg of his Love On Tour and will pick up the European and South American halves starting in June, following his appearance at Coachella.  The last tour date is set for December 10 in Brazil.