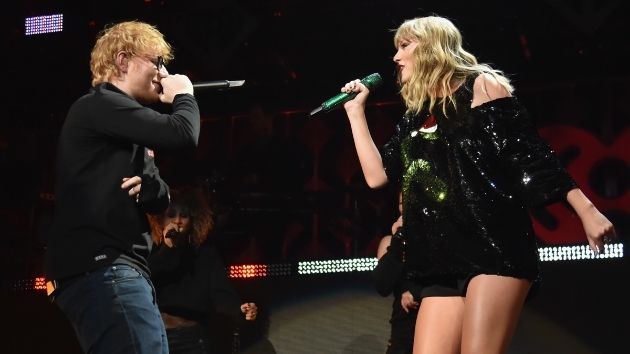 The English singer-songwriter revealed the news while on the red carpet of the 2022 Brit Awards Tuesday, telling LADBible, “it comes out Friday and it’s with Taylor Swift.”

“We’re literally announcing that in, like, an hour,” the “Bad Habits” singer added, but as of publication nothing has been officially announced.

Sheeran didn’t reveal the name of his upcoming track with Swift, however, fans strongly believe it will be a remix to “The Joker and The Queen,” a song from his most recent album, = (Equals).

According to fan theories, the duo has dropped plenty of hints alluding to the collaboration including, an official lyric video for the song that in the publishing info plain as day says, “The Joker And The Queen (feat. Taylor Swift)” and an Instagram teaser that showed Sheeran signing CDs with artwork depicting a playing card that was one half joker and one half queen — with the queen looking very much like Taylor with blonde hair and bangs.

Whatever the song is, this isn’t the first time the two have teamed up. They have previously released three songs together, all on Taylor’s albums: “Everything Has Changed” on Red, “End Game” on Reputation and “Run,” a vault track on Red (Taylor’s Version).