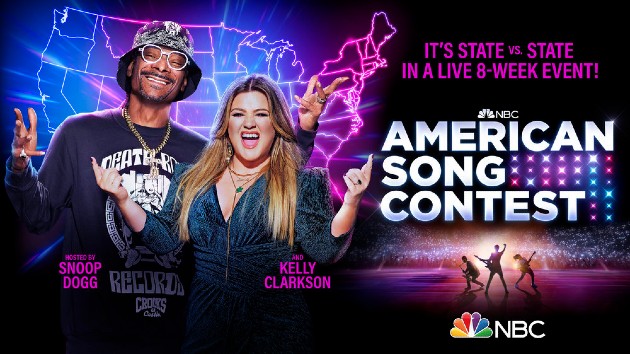 Turns out there will be quite a few ringers on NBC’s new competition show American Song Contest, hosted by Kelly Clarkson and Snoop Dogg.

The concept features 56 different artists, each representing either a U.S. state, territory or district, performing an original song.  In three rounds over eight weeks, one of the artists — a solo singer, band, group or DJ — will win the title of Best Original Song.  Except some of the artists participating are already famous, chart-topping, platinum-selling stars, which you might think would give them an unfair advantage.

For example, representing the state of Connecticut, it’s Michael Bolton, who’s written or co-written a string of hits over the years.  Representing Alaska is Jewel, whose 1995 debut album Pieces of You has sold some 12 million copies. Representing Maryland is Mr. “Thong Song” himself, Sisqó.

Meanwhile, pioneering electronic act The Crystal Method is representing Nevada, Grammy-winner Macy Gray is representing Ohio, and soul/R&B singer Allen Stone, who’s well-known enough to have been tapped to duet with contestants on American Idol in 2018, is repping for Washington State. Jordan Smith, who won season nine of The Voice, is representing Kentucky.

Imagine how awkward it will be if a Grammy-winning artist ends up losing to some unknown singer. Tune in when American Song Contest premieres Monday, March 21 at 8 p.m. ET/PT on NBC.