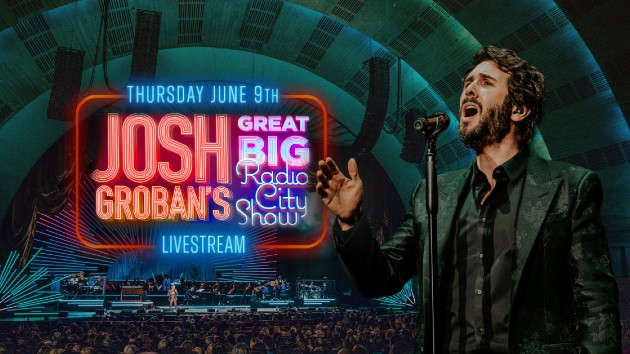 Thursday night at 8 p.m. ET, Josh Groban will livestream a recording of his Great Big Radio City Show from April, which featured music, comedy and special guests over three nights. When will he return to the legendary New York City venue? “It’s a good question,” he says.

“We did these three and they were a smashing success — more than we could have possibly hoped for,” Josh tells ABC Audio. “Y’know, it’s a big show to put on. It’s an expensive show to put on. And so the idea — with the folks at Radio City and I — was basically to kind of say, well, ‘Let’s craft something that we can … go back and do as often as we feel like we’ve got the time and energy to do it."”

Right now, both seem to be in short supply, since Josh kicks off a tour later this month. Plus, there’s the issue of how COVID has impacted the live concert business. Prior to the pandemic, Josh had planned to do 12 shows a year at Radio City.

“We were going to do one a month, after the first one we did [in February 2020],” he explains. But now, he says, “The entire world has shifted their live business to ‘right this minute."”

And after the tour, Josh plans to record a new album, so his schedule’s kinda full.

“[It’s a] good problem to have, but there’s a lot going on,” he laughs. “I would love to keep talking to the good folks at Radio City and see if there’s something that we can do, because it’s been a blast

After Wednesday night’s livestream, the show will be available on demand through Sunday, June 12. Tickets start at $35 and are on sale now.

“From one queen to another”: Madonna shows off the gorgeous bouquet Beyoncé sent her

“We’re back!” Justin Bieber returns to the stage for first time since Ramsay Hunt diagnosis