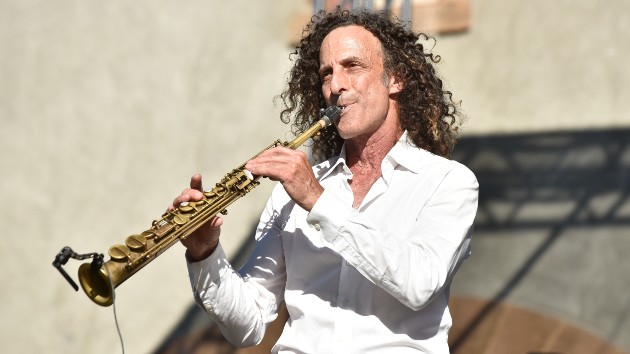 It’s Valentine’s Day, and certainly one of the grandest celebrity romantic gestures for the holiday we’ve seen in recent years was in 2019, when Kanye West had Kenny G come over to his house and serenade his then-wife, Kim Kardashian, while standing in a room full of roses. So, is Kenny bummed that Kanye and Kim have now split up? Well, not really.

“No, I mean, that’s up to them!” he laughs. “I don’t have any vested interest in their relationship in that way. But it sure was fun to be at their house in that very intimate moment on Valentine’s Day. That was a lot of fun.”

That moment also led to Kenny joining Kanye, now known as Ye, on the rapper’s 2019 album Jesus Is King: He played sax on the song “Use This Gospel.” Would Kenny ever considering playing that song in one of his shows?

“I never thought about that before,” he tells ABC Audio. “The only thing that would make sense really would be the Kanye melody…that could be pretty cool!”

In addition to working with Kanye, Kenny collaborated with The Weeknd on a 2020 remix of his song “In Your Eyes.” He says there’s another chart-topping star he’d like to work with.

For Kenny, the most important quality in a collaborator is having great musical chops — like The Weeknd.

“He’s a great singer. He is a truly talented guy with an amazing voice,” Kenny notes. “So if he wants to do more stuff together, I’d be so into it!”

Maybe Kenny will get some calls now that he starred in that Super Bowl ad for Busch Light over the weekend.

Brokenhearted on Valentine’s Day? There’s a Taylor Swift bar you should check out

This Is It: Kenny Loggins announces final tour

Rihanna launches new “Game Day” collection; halftime show will be “unlike anything you’ve ever seen before”