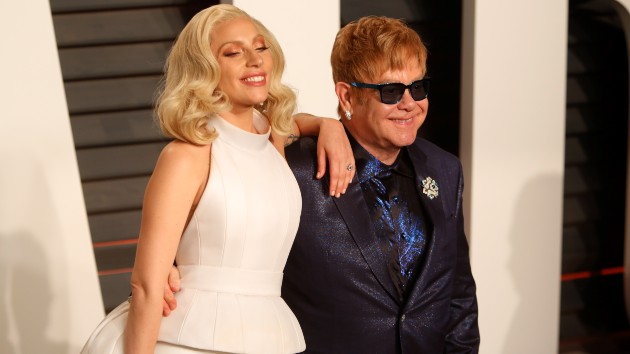 Elton himself can’t be there, but this year’s Elton John AIDS Foundation Academy Awards Viewing party will still be pretty star-studded.

Lady Gaga will co-host the evening, along with Billy Porter, Will & Grace star Eric McCormack and Elton’s husband and manager, David Furnish.  As previously announced, Brandi Carlile will perform at the event, which takes place March 27 in West Hollywood Park.

It’s no surprise that Elton has tapped Gaga to co-host the event: Not only are they friends and musical collaborators, but Gaga is also the godmother to Elton’s two sons. Also, Gaga sadly didn’t receive an Oscar nomination for her role in House of Gucci, so she’s sort of free that night.

“Lady Gaga, Billy Porter and Eric McCormack are not only amazingly talented, but have greatly contributed to LGBTQ+ visibility and inclusion in entertainment – both on screen and in music,” Furnish, who’s also chairman of Elton’s AIDS Foundation, says in a statement. “I’m honored to have this group to join me on stage in West Hollywood Park to advocate for all marginalized groups affected by HIV.”

Porter and Furnish will take part in an Instagram Live conversation on March 3 at 8:45am ET on the EJAF feed. This will be the 30th anniversary of the Viewing Party, which has raised more than $86 million since its inception in 1992.

Meanwhile, Elton will miss the party for the first time because he has a concert that night which he can’t reschedule. On Instagram, he wrote that the event “is in the best hands with my dear friends @ladygaga, @eric_mccormack & @theebillyporter…And I can assure you…our return to West Hollywood for the first time in two years will be one truly spectacular evening!”