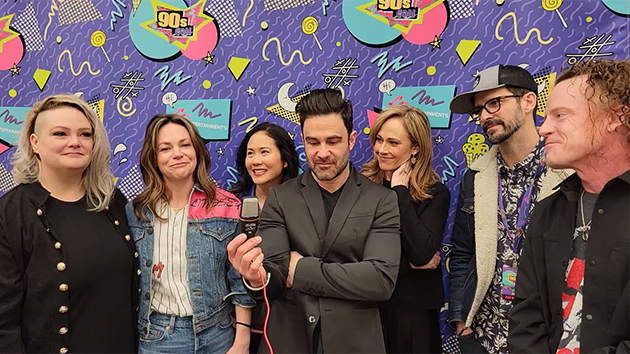 The stars of The All New Mickey Mouse Club reunited at Connecticut’s Hartford Convention Center last weekend for the first-ever 90s Con.

The cast told ABC Audio that being a part of the beloved kids’ TV show allowed them to make great friends — and score some cool prom dates.

Damon Pampolina explained,”Orlando [Florida] was the birth of a lot of careers. So there was some six-degrees of separation.” He then pointed toward Jennifer McGill and cracked, “This one go to go to prom with Joey Fatone. Twice.”

“We were friends! We just went,” Jennifer retorted.

Damon then pointed to Deedee Magno Hall and continued, “Deedee go to go with JC[Chasez]” — a fellow MMC member prior to hitting it big on NSYNC — to which Deedee replied, “I sure did! He was a gentleman.”

“We got to socialize with talented young people both on the show and off the show, including Joey Fatone,” she said, adding the cast would also mingle with kids from other networks, such as Nickelodeon. “We were really, really lucky. We were really blessed to have that development of lifestyle.”

Lindsey mentioned they were also able to meet some of the biggest names in music, which had the cast gushing over the numerous guests MMC welcomed to the set, including Toni Braxton, New Kids on the Block, Brian McKnight, Tiffany and Milli Vanilli.

Added Jennifer, “JoeyMcIntyre gave me an Egg McMuffin and I almost lost it! I was 11… it was amazing.”

The group also revealed another memory — they never forgot the show’s iconic closing theme, and burst into an impromptu performance.

Gloria Estefan, Sade and more to be inducted into Songwriters Hall of Fame this year