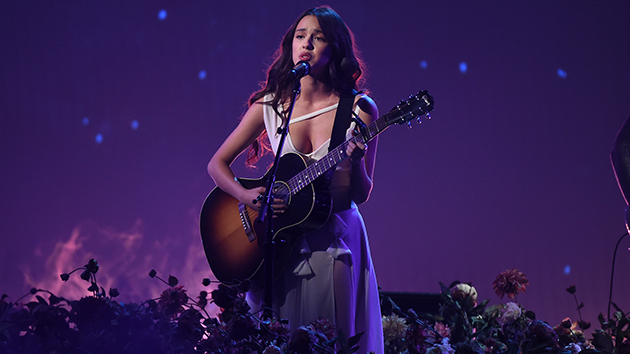 Olivia Rodrigo helped pen Alexander 23‘s new heartbreak anthem, “Hate Me if It Helps,” which is about his ex treating him like the bad guy but being okay with it because it’s helping her heal.  Like Olivia’s SOUR album, this song was inspired by Alexander’s recent breakup.

BTS‘s Suga and Jungkook teamed up for the song “Stay Alive” for their fantasy web comic 7FATES: CHAKHO, which features characters styled after BTS.  The pensive track was produced by Suga and sung by Jungkook.

Doja Cat‘s cover of Hole‘s 1998 rock hit “Celebrity Skin” is finally out.  The Grammy nominee recorded the song for her upcoming Taco Bell commercial that’ll air during the Super Bowl on Sunday.

Tate McRae released the official music video for her new single “she’s all i wanna be,” which shows off her tremendous dance talent.  Tate was the first-ever Canadian finalist on So You Think You Can Dance and is a former pro dancer.

Alessia Cara has released her “I Miss You Don’t Call Me” Valentine’s Day box, which you can now purchase for $125 on her official store. The box comes full of goodies such as her In The Meantime album, a vanilla-scented candle, playing cards and more to help those broken hearts keep their minds off their exes.

Cardi B has love on the brain — literally.  She styled an adorable heart shape into her hairline to get herself dolled up for Valentine’s Day.  She shared a video showing off the sweet look and gave fans some serious inspiration for their Valentine’s style.

We lost the irreplaceable ﻿Whitney Houston﻿ 10 years ago today, and ﻿Mariah Carey﻿ saluted the singer on Friday.  “Missing you,” she wrote while sharing a throwback photo of the two in the studio, recording “When You Believe.”