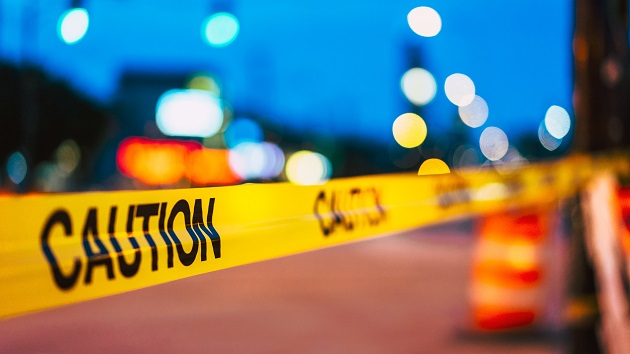 (COLORADO SPRINGS, Colo.) — A 22-year-old is set to be charged with hate crimes for allegedly killing five people and injuring many others with a legally purchased assault-style rifle at an LGBTQ nightclub in Colorado, according to officials briefed on the investigation.

At least two people, whom authorities described as heroes, then confronted Aldrich and fought with him, which saved more lives, police said.

During a press conference on Monday, police identified Thomas James and Richard Fierro as the people who stopped the suspected gunman. Fierro was in the U.S. Army for 14 years and served in Iraq three times and Afghanistan once, Army spokesperson Sgt. Pablo Saez told ABC News.

Among those killed was Daniel Aston.

“He was smart, he was funny, he was talented. He was an amazing human being,” Aston’s fiance, Wyatt Kent, told ABC News.

When gunfire erupted in the club, Kent said two people fell on top of him, protecting him.

Kent said a woman who fell on him “was moaning,” and he told her to “keep squeezing my hand.” She had been shot in the chest and “passed away on top of me,” he said.

Kent credits that woman for saving his life.

The first 911 call came in at 11:56 p.m. Saturday and an officer was dispatched to the scene seconds later, Lt. Pamela Castro, spokesperson for the Colorado Springs Police Department, told reporters. The first officer arrived at midnight, and the suspect was detained by 12:02 a.m., Castro said.

Bartender Michael Anderson told ABC News he heard pops, and when he looked up he saw “the shadow of a grown man wielding a rifle.”

Anderson said he ducked down and heard glass shatter and bottles break. He said he then ran outside to the patio to hide.

“It was absolute chaos. People were running, screaming. And the screaming intensified as people became aware of what was happening,” he said. “No one ever expected that here.”

“I am haunted by some of the things I saw,” he said.

Aldrich was injured and remains in the hospital, police said. Medical personnel will determine when he is released to authorities, Castro said.

The court has sealed the arrest warrant and supporting documentation connected with Aldrich’s arrest. According to the motion by prosecutors, if the records were “released, it could jeopardize the ongoing case investigation.”

Aldrich was arrested in a June 2021 bomb threat incident after the El Paso County Sheriff’s Office was alerted that he was in possession of a homemade bomb, law enforcement officers briefed on the investigation told ABC News. He was charged with two counts of felony menacing and three counts of first-degree kidnapping, but no explosives were found in his home, Colorado Springs radio station KRDO reported.

Aldrich’s 2021 arrest may not have appeared on background checks because the case does not appear to have been adjudicated, according to officials briefed on the investigation.

ABC News and other news organizations have petitioned the court in Colorado to unseal the records about Aldrich’s 2021 arrest.

Colorado’s red flag law, which went into effect in 2020, allows relatives, household members and law enforcement to ask a judge to order the seizure of a gun owner’s weapons if that owner is believed to be a risk to themself or others.

It is unclear whether the law would have stopped the suspect from targeting the club, El Paso County Sheriff Bill Elder told ABC News.

Elder did not recall the circumstances surrounding Aldrich’s 2021 arrest, he said.

Club Q is a safe haven for the LGBTQ community, the police chief said. The club hosts a weekly drag show and live DJ on Saturday nights, according to its website.

The owner of Club Q, Nic Grzecka, told ABC News that they didn’t recognize the suspect and had never seen him inside their business.

Active shooter protocol was also activated, Grzecka said, which is something Club Q has had in place since the 2016 Pulse nightclub shooting in Orlando, Florida.

“Our prayers and thoughts are with all the victims and their families and friends,” the club said in a statement posted on Facebook. “We thank the quick reactions of heroic customers that subdued the gunman and ended this hate attack.”

The shooting unfolded on the eve of the annual Transgender Day of Remembrance.

President Joe Biden said in a statement that “the LGBTQI+ community has been subjected to horrific hate violence in recent years,” drawing comparisons to the Pulse nightclub shooting.

“Places that are supposed to be safe spaces of acceptance and celebration should never be turned into places of terror and violence. Yet it happens far too often,” Biden said. “We must drive out the inequities that contribute to violence against LGBTQI+ people. We cannot and must not tolerate hate.”

Colorado Sen. John Hickenlooper tweeted that the LGBTQ community needs to be protected from “this hate.”

Colorado Sen. Michael Bennet tweeted that he was “sending strength to those who were injured, the survivors, and Colorado’s LGBTQ community.”

“As we seek justice for this unimaginable act, we must do more to protect the LGBTQ community and stand firm against discrimination and hate in every form,” Bennet said.

“Our hearts are broken for the victims of the horrific tragedy in Colorado Springs, and their loved ones.” GLAAD President and CEO Sarah Kate Ellis said in a statement Sunday. “This unspeakable attack has robbed countless people of their friends and family and an entire community’s sense of safety. You can draw a straight line from the false and vile rhetoric about LGBTQ people spread by extremists and amplified across social media, to the nearly 300 anti-LGBTQ bills introduced this year, to the dozens of attacks on our community like this one.”

Colorado Gov. Jared Polis said, “My heart breaks for the family and friends of those lost, injured and traumatized.”