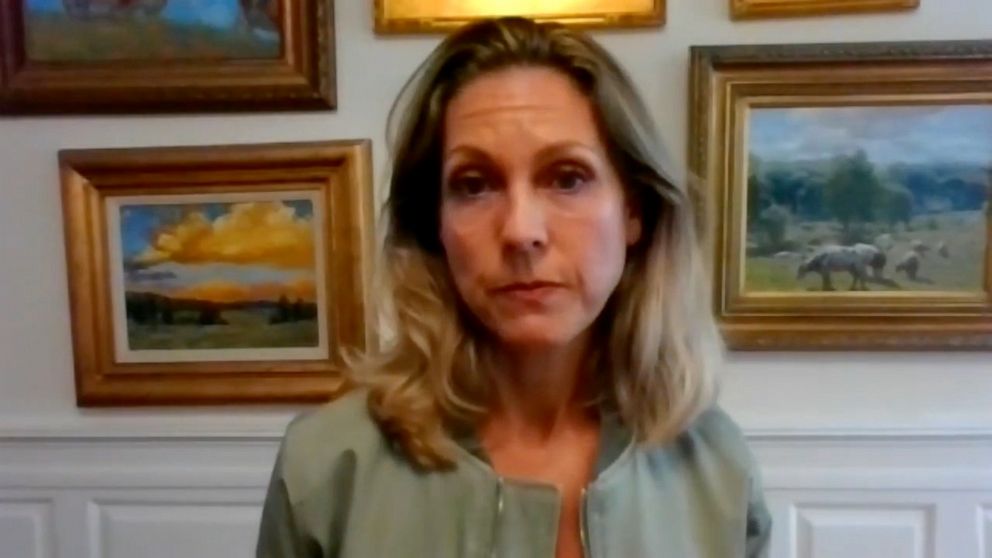 (NEW YORK) — As the Sept. 11, 2001 attacks were unfolding, then-Air Force Lt. Heather Penney was given a mission to intercept hijacked United Airlines Flight 93 before it reached Washington, D.C. The rookie F-16 pilot said she believed she would not come back from that mission.

“[I remember] how crystal blue the skies were that day,” she told ABC News Live anchor Linsey Davis. “There are so many moments that I remember with such clarity that I can touch, taste, feel hear, smell every detail from that day. But what strikes me the most, because of how omnipresent it was throughout the entire day was the deep, clear blue skies.”

At first, Penney said it wasn’t immediately clear that an airplane had been deliberately flown into the World Trade Center. When the second plane hit, “that’s when we knew that our nation was under attack.”

She went to arm her aircraft, but there wasn’t enough time. She and another pilot, Marc Sasseville, had to get in the air.

“We did not have missiles. We were on a suicide mission. And in order to be able to take any airliner down, Sass would ram his aircraft into the cockpit where the terrorists were, to destroy the flight controls,” she explained. “I would take the tail by ramming my jet into the tail of the aircraft, I would aerodynamically unbalance the airplane and tip it over so it would crash straight into the ground by targeting both ends of the aircraft. It was our plan to prevent any additional casualties.”

After witnessing the horror of the attacks in New York, she said she understood what needed to be done.

“I had raised my hand and swore an oath to protect and defend our nation,” she said. “If this was where the universe had placed me at this moment in time… that this was my purpose. Anyone who had been in our position would have been willing to do the same thing. And the proof is in the pudding, because the passengers on Flight 93 did.”

Flight 93 was hijacked by four al-Qaeda terrorists nearly an hour after takeoff and diverted east toward Washington, D.C.

“We knew what needed to be done. And there were no tears. The prayers, to be honest,” Penney said, were “‘Dear God, don’t let me mess this up.’ Because of how important it was and the potential consequences if we were not successful.”

But Penney did not complete her suicide mission. Flight 93 passengers attempted to retake the plane, and in the struggle, the aircraft crashed in a field in Pennsylvania, killing everyone on board. It was the only one of the four hijacked aircrafts that day that did not reach the terrorists’ intended target.

Penney, whose call sign was “Lucky,” said she didn’t feel lucky for escaping her suicide mission that day.

“When you look back on the timeline, [the Flight 93 passengers] crashed their airliner nearly half an hour before we got airborne. I don’t consider myself lucky because what they did was something they never should have had to do. When they boarded Flight 93 that day, they were just simply going on a business trip or coming home from vacation… They hadn’t raised their right hand and sworn an oath to protect and defend like I had. I feel like we were a mission failure for so many reasons.”

Penney said she did not have the chance to reflect on what might have been. She “immediately moved to 24/7 combat air patrols,” flying from midnight to 4 a.m. for nearly a year, she said. Then, she went to train for combat operations in Iraq, where she served two tours.

She said her reflection didn’t come until nearly a decade later when commemoration ceremonies honored the first responders, and her story came out. “That’s really when I began to think about what I witnessed that day and the meaning of the sacrifice of those first responders and the heroism that they all displayed,” she said.

In New York City, 412 emergency workers who responded to the World Trade Center were killed in the attacks. Scores more who survived suffered from a litany of medical conditions, including cancer and respiratory diseases linked to the attacks.

Penney hopes that now, 20 years after the 9/11 attacks, the nation can come together in the same way it did then.

“We have to make a commitment to stability. We have to make a commitment to engaging in that kind of dialogue and remembering that there are things that connect us… What it means to be an American is so much more than the differences that we [have] between us,” she said. “We need to recommit to understanding before judging… that those connections are more important than our differences, and to overcome or move past our fear and into the ability to serve. Move beyond ourselves.”