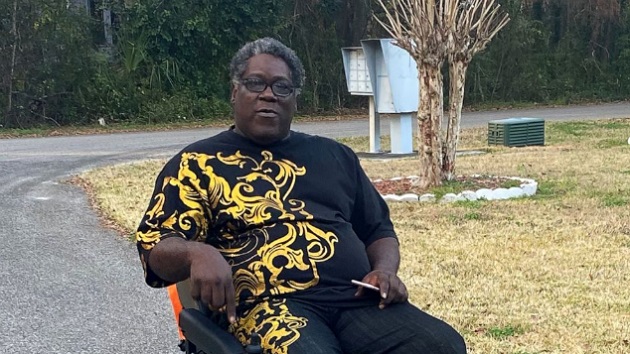 (GAINESVILLE, Fla.) — When Murray was released from prison in July, he didn’t have a source of income. The 54-year-old, whose last name is being withheld ​because he fears for his safety, is no stranger to struggling financially; he grew up poor in Gainesville, Florida, and resorted to stealing or shoplifting in the past.

“When you live with something in your life for so long, such as criminal activity, you always have this lingering thought in your mind: ‘I know a way to get some money and it wouldn’t take me long to get it,’ Murray said.

He was “down and out” after prison, he said, and doing his best to make a new life for himself, but money was hard to come by.

A new guaranteed income program in Gainesville aims to solve this issue.

Guaranteed income programs across the country give direct cash payments to recipients in order to address poverty or economic inequality, They can be targeted toward a specific population or be universal.

Some critics say these initiatives have to be multifaceted to address the nuances of poverty. Others argue they will stop people from working — though such claims have been debunked — or be too expensive to maintain.

This effort is a collaboration between the guaranteed income pilot program Just Income GNV and Mayors for a Guaranteed Income, a national network of mayors and researchers spearheading these kinds of programs. They have selected formerly incarcerated individuals who live in the city to receive $1,000 in January, followed by $600 each month for a year.

Their spending is monitored for research purposes, but the recipients are not told how to spend their money.

One month after his first cash assistance check, Murray said he is already seeing the effects an extra monthly boost can have on his well-being and stability.

He’s disabled and needs assistance with walking, so he plans on using the money to help get a scooter and a car to make transportation and mobility easier.

“It’s a relief, which is amazing. I can plan things now and guarantee they’re gonna happen,” Murray said. “I’ve been able to help out some of my relatives with money for gas and got a couple more other relatives who were low on food and I was able to help with that. And just so many great things that this program has really introduced into my life.”

The program seeks to address the cycle of financial inequality that often affects people impacted by the criminal justice system, especially in Florida which, according to the Prison Policy Initiative, outpaces the overall U.S. incarceration rate. Florida has a rate of 795 incarcerated people per 100,000 compared to 664 in the U.S. as a whole.

Research has also shown that incarceration disproportionately creates a lasting impact on Black and brown communities, as well as impoverished people.

When people come out of prison, they can face discrimination and barriers to economic opportunities, criminal fines, debt, fees and parole that can haunt them long after their sentence is over, according to Kevin Scott, the director of Just Income GNV who is also formerly incarcerated.

For some, the experience can lead them back into the criminal justice system.

When someone can’t/won’t pay a fee or fine and can’t/won’t show up to a court date regarding the fee, it could result in more jail time or additional debt for them, according to the Brennan Center for Justice.

Researchers at the National Research Council Committee on Law and Justice also found links between high incarceration rates and the criminalization of poverty through policy changes.

“I see it so many times when I was in prison guys coming back to prison over and over and over again because they didn’t have enough money to stay on the street and us as a society need a better system,” said David, 54, who has asked that his name be withheld out of safety concerns. He is another formerly incarcerated man and Vietnam veteran who is receiving cash assistance.

David finished a 45-year sentence in the summer and said the monthly income has been a saving grace. He said there have been family emergencies that the money has allowed him to handle, including getting his daughter out of a dangerous domestic situation.

“Had not that money been there, I don’t know what would have happened,” said David.

David said the money has given him the extra step up that he needed to succeed coming out of a long prison sentence.

“It’s sad that it boils down to that because I’ve got a lot of education under my belt for jobs,” David said. “But if you don’t have the initial step or a little way to get moving … what it all boils down to is the almighty dollar.”

Steady, the technology firm and app that helps Mayors for Guaranteed Income programs distribute money to recipients, said it can track what recipients spend their funds as part of the research and advocacy for this project.

Adam Roseman, the CEO and co-founder of Steady, said that it’s a harmful stereotype that low-income earners spend their money irresponsibly or that guaranteed income recipients may not be financially literate with their funds.

The data the company has seen so far has disproved that, he says: “They’re spending the money on things that are important to their daily lives, food, housing, paying down debt payments, acquiring new skills through career programs.”

Cash assistance, according to Roseman and Sukhi Samra, the director of Mayors for a Guaranteed Income, has been extremely helpful in getting people back on track — pointing to other forms of help like the federal Child Tax credit.

“We’ve actually seen income lifts as sizable as 40 or 50% for those individuals that received emergency cash or universal basic income,” Roseman said. “You alleviate some of that major financial stress” that is holding them back from solving bigger challenges.

She says these types of programs have changed lives.

She says she’s seen people escape abusive marriages, address their mental health and well-being, or have offered them a lifeline during times of unemployment or have given them the tools needed to find work.

The ultimate goal: “a federal policy. We are investing in pilots like the one in Gainesville to build the evidence base for a federal guaranteed income,” Samra said.

David and Murray are busy making plans for their families and futures, now that they have some relief knowing they won’t be scrounging for cash to take care of themselves.

In honor of Murray’s mother’s upcoming 75th birthday celebration in March, he says he wants to give back now that he’s got some cash to support himself.

He plans on putting together 100 bagged lunches and drinks for the homeless and for the community, knowing that he was once where they were.

“I appreciate what’s happened in my life and I want to give back and I want to share and give hope to other people,” Murray said.

If Roe is overturned, experts fear for incarcerated people and reproductive care

After deadly tornadoes hit South and Midwest, horror and hope emerge from rubble

With Julius Jones’ execution date looming, family refuses to give up hope