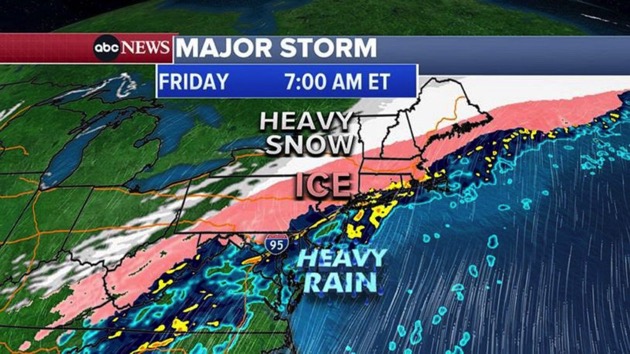 (NEW YORK) — A massive winter storm is pushing east, blasting the Midwest with snow and the South with ice — and now taking aim on the Northeast.

Over 4,000 flights have been canceled as of Thursday morning — the biggest flight cancellation day of the year. Dallas, Chicago and Austin are the most impacted cities.

The snow has already pummeled Chicago and St. Louis. Governors in Illinois, Missouri, Oklahoma and Kentucky have declared states of emergency.

More heavy snow is expected from St. Louis to Indianapolis to Cleveland on Thursday. Six to 12 inches of snow is forecast for Indiana and Ohio.

Arkansas, Tennessee and Kentucky could see a thick layer of ice and possible power outages.

In Texas, officials are urging residents to stay home as ice and snow accumulate on roads. More than 50,000 customers are without power in Texas and the Dallas Fort Worth International Airport has suspended operations as the state tackles a winter storm dropping snow, sleet and ice.

On Friday, the storm heads to the Interstate 95 corridor. Freezing rain and falling temperatures could cause very icy roads in Boston and the New York City area.