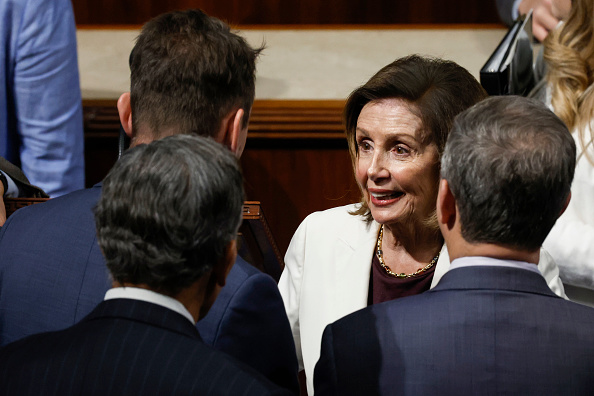 (WASHINGTON) — House Speaker Nancy Pelosi strode into the Capitol on Thursday morning dressed in a suffragist-white pantsuit, flanked by top aides as her filmmaker daughter, Alexandra, who has for three decades documented her mother’s life and career, trailed behind holding a camera, recording her latest historic moment.

Now 82, the first and only woman elected as House speaker, second in line to the presidency and the highest-ranking woman in American government, commanded even more attention than usual as she slid through waves of press who bombarded her with questions about her political future — just hours before her farewell speech after nearly two decades as the top Democratic leader.

Pelosi, who in the past month has both endured the loss of a Democratic majority in the House and a violent attack of her 82-year-old husband Paul in their San Francisco home — an assault intended for her, police said — learned on Wednesday that she’d need to relinquish the gavel to Republicans. Now, her stepping aside to make room for new generation of House leaders is official, even though for now she will remain in Congress.

“History will note she is the most consequential Speaker of the House of Representatives in our history,” Biden said.

“With Nancy, you see a father’s daughter who learned by his side how to win and govern. With her leading the way, you never worry about whether a bill will pass,” he said. “If she says she has the votes, she has the votes. Every time.”

In his statement, Biden credited Pelosi with being the “singular force” in securing “once-in-a-generation bills that will define our nation for decades to come,” including the Inflation Reduction Act, infrastructure investment, the CHIPS and Science Act and gun legislation, among others.

She was elected as first female speaker in 2007 and again in 2019 — the only speaker in 70 years to have won the office twice, after having lost the spot when Republicans regained the House majority in 2010. She has led House Democrats for 19 years — previously having served as House Democratic whip. She rose to Democratic prominence in 2002, after whipping the majority of the party against an Iraq War resolution that her mentor, Minority Leader Dick Gephardt of Missouri, crafted with President George W. Bush’s administration. She became minority leader when Gephardt stepped down to run for president.

Her measured rise to power has been characterized by her steady command of inside politics and her ability unite conflicting factions of Democrats in order to achieve legislative success.

Journalist Susan Page, the author of a biography about the House speaker, called Pelosi a “master of the inside game of politics” in an April 2021 interview with ABC News’ “Powerhouse Politics” podcast.

“She’s not so great about the public stuff. She’s not great at giving a speech, she can stumble when she speaks extemporaneously — she is a master of the inside game of politics and of being a legislative leader,” Page said, noting that Pelosi stood up for California Democratic Rep. Maxine Waters when Republicans tried to censure her.

In the book, Page reveals that Pelosi originally planned to step down after the 2016 election but changed her mind after former President Donald Trump was elected.

In 2019 Pelosi led the investigation that resulted in the third presidential impeachment in history, following Trump’s moves to solicit foreign intervention in the 2016 presidential election and withhold congressionally appropriated assistance to Ukraine.

Pelosi again headed Trump’s second impeachment in 2021, after his supporters mounted a violent insurrection against the U.S. Capitol following the 2020 presidential election that Trump sought to overturn. She then led the House in creating a bipartisan select committee to Investigate the Jan. 6 attack.

Notably, as Pelosi marked her career accomplishments during her farewell speech on Thursday, she omitted any mention of Trump while noting the other presidents whom she had “enjoyed” working with.

On “Powerhouse Politics,” Page brought up another time Pelosi was thinking about stepping down — after the 2010 election when Republicans retook the House.

Pelosi has been a political fixture for decades and is the daughter of Thomas D’Alesandro Jr., who served as mayor of Baltimore for 12 years, after representing the city for five terms in Congress.

For years, Pelosi has long been the subject of Republican ridicule, her image satirized more than most others for years in GOP campaign ads. It came to a head in October, when her husband of almost 60 years was subject to a targeted attack.

The two met in Washington, D.C., at Georgetown University in 1961 and have five children and nine grandchildren. Pelosi raised their children in San Francisco and started a Democratic Party club at her home, until she began working for the presidential campaign of California Gov. Jerry Brown in 1976, when she was 36.

By 1981, she was the Democratic Party chair for the state of California. After her youngest child left for college, Pelosi ran for Congress and was sworn in June 1978.

Buffalo’s deadly blizzard by the numbers: What made the storm so historic