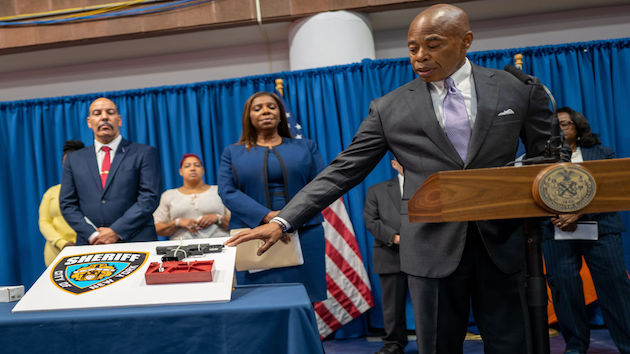 The defendants include some of the nation’s leading gun distributors, including Brownells, Indie Guns, Primary Arms and Rock Slide.

The lawsuit, filed by New York Attorney General Letitia James, accused the gun distributors of flooding the streets with ghost guns — firearms that come packaged in parts, which can be bought online and assembled without much of a trace.

Law enforcement officials have said ghost guns, created using unfinished frames and receivers, are partially responsible for the surge in gun violence and gun-related crime, especially on the streets of American cities.

In some instances, the defendants sold unfinished frames and receivers to consumers with criminal records or other disqualifying conditions, the lawsuit claims.

Brownells and two other gun distributors, 80 Percent Arms and KM Tactical, delivered orders to an individual living in New York who was a member of a far-right militia-style organization with a history of political violence, according to the attorney general’s office. New York Police Department investigators later recovered two unserialized completed guns, 11 high-capacity magazines, four additional unfinished frames and receivers, as well as other gunmaking tools, from where he was staying, the attorney general’s office said.

According to the lawsuit, in May, an individual with a criminal background, who was legally ineligible to own or operate a firearm, received shipments from Brownells, after previously receiving shipments from Glockstore and Primary Arms. That same month, that individual allegedly used a ghost gun in a triple shooting that killed one person and injured two others in the Bronx.

Several businesses named in the lawsuit tout that their products can be acquired without government registration or “oversight.”

80 Percent Arms, writes on its website, “This means no RED TAPE including: NO Registering an 80% Lower, NO Transfer fees like a typical firearm, NO FFL [Federal Firearms License] Required, Ships right to your door.”

Glockstore writes on its website, “You can build a completely legal handgun without any ‘government oversight’ aka interference…No fuss, no muss, no registration, no records.”

Christian Waugh, an attorney for Indie Guns, of Orlando, Florida, called the lawsuit a “groundless attempt to once again burden and limit the rights of New York City residents.”

“[This] is absolutely a politically-motivated effort to vilify a small business that has violated no federal, state, or municipal law,” Waugh said in a statement to ABC News. “Craft guns are not a problem. Like cars or baseball bats, they are almost always used for legal purposes. Sometimes, they can be misused by a person with bad intent.”

Pete Brownell, chairman of the Iowa-based Brownells, said in a statement to ABC News, “As one of the nation’s oldest, family-owned firearms retailers, Brownells has always taken its compliance obligations very seriously and we look forward to addressing these claims through the legal system.”

ABC News did not immediately receive a comment from the other eight defendants in response to email inquiries.

The lawsuit alleged that the distributors have endangered public health and safety and failed to make sure their products do not fall into improper hands. In addition to restitution and damages, the lawsuit is seeking to ban the defendants from selling, shipping and distributing unfinished frames or receivers in New York.

New York City also simultaneously filed a lawsuit against five of the defendants named in the state’s lawsuit seeking to halt the sale and delivery of illegal gun components into the city.

The lawsuits come days after the U.S. Supreme Court struck down a New York law limiting concealed handguns in public.

The state’s suit marks the first time the newly enacted Public Nuisance law is being invoked, according to the attorney general’s office. The statute allows gun distributors and manufacturers to be held liable for actions that harm public safety.

In December, the National Shooting Sports Foundation filed a federal lawsuit seeking to block the new law from being enforced. A preliminary injunction was ultimately denied last month, and the plaintiffs have since filed a notice of appeal.