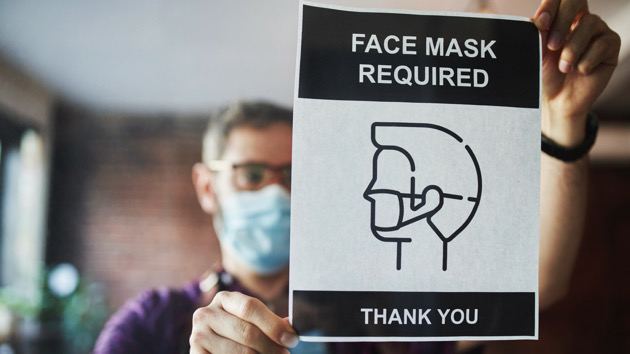 “Due to decreasing hospitalizations and a leveling of case counts, the city will move to strongly recommending masks in indoor public spaces as opposed to a mask mandate. Given the latest data, the Board of Health voted tonight to rescind the mandate,” a representative from Philadelphia Mayor Jim Kenney’s office told ABC News on Thursday.

It is still unclear exactly when the mandate will officially be lifted.

Philadelphia first ended its mask mandate in the beginning of March before reinstating it a little over a month later. The new mask mandate that went into effect Monday required masks in all indoor public spaces, including schools, childcare settings, businesses, restaurants, and government buildings.

“I sincerely wish we didn’t have to do this again. I wish this pandemic was over just as much as any of you but I am very worried about our vulnerable neighbors and loved ones,” Health Commissioner Cheryl Bettigole said during a press conference when the new mandate was first announced April 11. “My hope that our actions today will slow the spread of COVID and help us avoid seeing our ERs, once again, gets so crowded, that people can’t get timely care when they need it.”

The abrupt shift comes just hours after Kenney had defended the decision to reinstate the city’s mask mandate during a Thursday interview with Washington Post Live.

“Our health professionals recommended that we do a mandate again, because their data have shown that mandates get people to wear them more than just highly recommended,” Kenney said in the interview. “Our case counts were 240% higher than they were when we got rid of the mask mandate a month ago. … Our belief is that wearing masks again will tamp down the case counts and hospitalizations … and allow us … to get back to more normalcy.”

The city’s mask mandate had drawn sharp criticism from some residents, with some local business owners going as far as to file a lawsuit against the city in an effort to overturn the requirement.

When asked about the pushback, Kenney insisted that he believes wearing a mask is the “simplest” action someone can take to keep their community safe.

“The mask issue … has become such a politicized issue. It’s the most simplest thing you can do to keep yourself safe and to keep people safe. And the politicization of this issue … has just made everyone crazy about it. It’s not a big burden to wear a mask,” Kenney told Washington Post Live. “I’m sad to say that this nation has devolved into a selfish bunch who want what they want for themselves and are sometimes not willing to help each other out as Americans.”