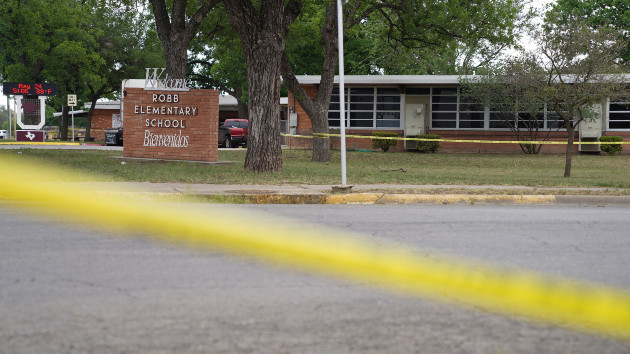 (UVALDE, Texas) — A small town in rural Texas is reeling after a gunman opened fire at an elementary school on Tuesday, killing 19 children.

Two teachers were also among those killed at Robb Elementary School in Uvalde, authorities said.

Prior to opening fire at the school, the suspect also allegedly shot his grandmother, authorities said.

The suspect — identified by officials as 18-year-old Salvador Ramos, a student at Uvalde High School — is dead.

May 25, 6:46 am
Ukrainian president offers condolences to families of the victims

Ukrainian President Volodymyr Zelenskyy offered his condolences to the families of the victims of the shooting on Twitter.

“Deeply saddened by the news of the murder of innocent children in Texas. Sincere condolences to the families of the victims, the people of the US and @POTUS over this tragedy,” Zelenskyy said in a tweet.

Zelenskyy added: “The people of Ukraine share the pain of the relatives and friends of the victims and all Americans.”

May 25, 5:24 am
Matthew McConaughey calls for action after shooting

Actor Matthew McConaughey decried the shooting in his hometown of Uvalde, Texas.

“We have tragically proven that we are failing to be responsible for the rights our freedoms grant us,” he wrote in a statement on Twitter.

“We cannot exhale once again, make excuses, and accept these tragic realities as the status quo,” he said.

May 25, 4:55 am
Amanda Gorman pens poem about shooting

Schools scared to death.
The truth is, one education under desks,
Stooped low from bullets;
That plunge when we ask
Where our children
Shall live
& how
& if

She also posted a series of tweets on gun violence.

“It takes a monster to kill children,” she wrote. “But to watch monsters kill children again and again and do nothing isn’t just insanity — it’s inhumanity.”

“I’d hoped, when I became president, I would not have to do this again,” Biden said. “Another massacre. Uvalde, Texas. An elementary school. Beautiful, second-, third-, fourth-graders.”

May 25, 4:55 am
Connecticut Sen. Chris Murphy pleads with lawmakers after shooting

Connecticut Democrat Chris Murphy gave an impassioned argument on the Senate floor to his colleagues late Tuesday afternoon, hours after 21 were killed in the mass shooting.

“What are we doing?” Murphy asked the chamber. “There have been more mass shootings than days in the year.”

“Our kids are living in fear every single time they set foot in the classroom because they think they’re going to be next. What are we doing?” he asked.

A fourth-grade teacher and a 10-year-old boy were among those killed, ABC News has learned.

The teacher, Eva Mireles, had worked in the school district for approximately 17 years, her aunt, Lydia Martinez Delgado, confirmed to ABC News.

Fourth-grader Xavier Lopez was among the 19 children killed.

At least 21 people are dead after a gunman opened fire in Uvalde on Tuesday, authorities said.

Most of the victims were children in their last week of school before the summer break. Many other students and adults were injured in the mass shooting.

Here’s what we know about what unfolded so far.

Uvalde residents confront school board over response to shooting