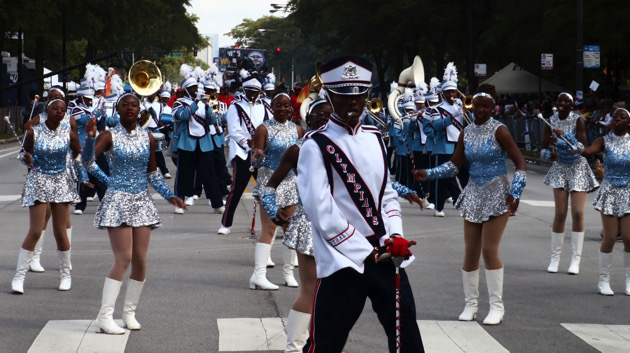 (CHICAGO) — Certain iconic imagery brings to mind traditional American summer activities: the smell of hamburgers cooking on a grill, marching bands with drum lines and kids catching candy thrown from colorful floats. These are all a part of the Bud Billiken Parade in Chicago.

First held in 1929, the Bud Billiken Parade is the largest African American parade in the United States, according to its organizers. It’s also one of the three largest parades in the country overall, along with the Tournament of Roses Parade on New Year’s Day and the Macy’s Thanksgiving Day Parade. Every year on the second Saturday of August, participants of the Bud Billiken Parade march and dance their way through the streets of Chicago.

Robert Sengstacke Abbott, founder of the Chicago Defender newspaper, and his editor, David Kellum, created the fictional character Bud Billiken in 1923 as a mascot for a youth group they had set up in the community. A Billiken is a mythical good-luck figure that was popular in the early part of the 20th century. Kellum then decided to have a day of celebration for Black youth and the Bud Billiken Parade was born.

Like many other public events, the parade was canceled in 2020 due to COVID-19.

“As our community continues to recover from the effects of the pandemic over the past couple of years, it is exciting that we are able to come together this year and celebrate the students of Chicago as they head back to school,” said the Bud Billiken Parade chair, Myiti Sengstacke-Rice, who is also the president and CEO of Chicago Defender Charities.

The 93rd annual Bud Billiken Parade will kick off on Aug. 13.