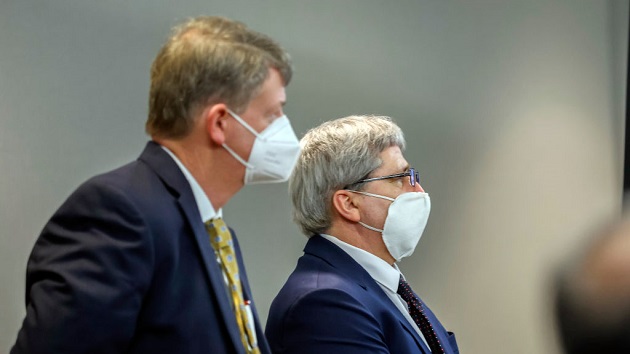 (ATLANTA) — Travis McMichael withdrew on Friday his guilty plea in the federal case against him in the death of Ahmaud Arbery. The trial goes forward on Monday.

Gregory McMichael, Travis’ father, informed a federal court Thursday evening that he was withdrawing his guilty plea to federal hate crime charges connected to Arbery’s death after a federal judge this week rejected the terms of a plea agreement reached with the Justice Department.

A lawyer for Gregory McMichael, the father of Travis McMichael, who shot Arbery in February 2020 three times at close range, informed U.S. District Court Judge Lisa Wood in a filing that he was ready to stand trial.

Wood rejected a plea deal in which federal prosecutors guaranteed the men would be able to serve the first 30 years of confinement in federal prison. She told the men she wanted an answer by Friday.

They will go to trial next week with their co-defendant William “Roddie” Bryan, who was not offered the same plea deal.

In accepting the change, the court agreed not to allow the statements made by the men last Monday in association with the plea, where they had admitted to targeting Arbery because he was Black.

Gregory McMichael, 66, and his 36-year-old son were convicted of state murder charges last year along with Bryan, 52, and were all sentenced to life in prison, the McMichaels without the possibility of parole.

The McMichaels and Bryan will be required to serve their state sentence before they serve a federal sentence, if they are convicted.

During a hearing on Monday in U.S. District Court in Brunswick, Georgia, Wood said she felt “uncomfortable” approving a plea deal that locked her into giving the McMichaels a three-decade sentence in a federal penitentiary. She noted that the case was in its early stages and said, “I can’t say that 360 months is the precise, fair sentence in this case.”

The federal trial will include evidence of the McMichaels’ prior racist behavior, which was excluded from the state trial.

Wood’s decision came on the heels of Arbery’s parents, Wanda Cooper-Jones and Marcus Arbery, giving impassioned statements in court. They asked the judge to deny the men their wish to go to federal prison, which is safer and better funded than most state prisons, according to legal experts.

“Granting these men their preferred conditions of confinement would defeat me,” Cooper-Jones told Wood. “It gives them one last chance to spit in my face after murdering my son.”

At Monday’s hearing, assistant U.S. attorney Tara Lyons said Travis and Gregory McMichael agreed to plead guilty to count one of a multi-count indictment alleging they interfered with Arbery’s right to enjoy the use of a public road he was jogging on “because of Arbery’s race and color.” Lyons said the agreement called for other charges to be dismissed, including attempted kidnapping and discharging a firearm during a violent crime.

The agreement also called for the McMichaels to waive their right to appeal in both the federal and state cases.

Arbery, 25, was fatally shot after the McMichaels saw him jogging in their Satilla Shores neighborhood near Brunswick, Georgia. They said they assumed Arbery was a burglar, armed themselves and chased him in their pickup truck. The McMichaels’ neighbor, Bryan, joined the pursuit, blocking the victim’s escape path with his truck.