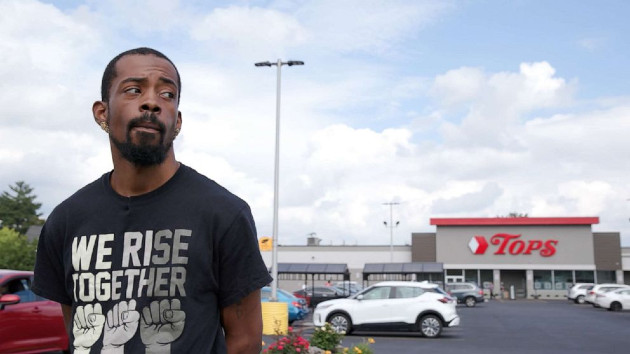 (BUFFALO, N.Y.) — In the four months since a gunman killed 10 Black people at the Buffalo, New York supermarket where he works, Carlton Steverson said he has been reeling with questions of why he survived the racially motivated rampage and racked with paranoia that as an African American he could find himself in the middle of a similar attack.

Although he said mental-health counseling and anti-anxiety medication has helped, the trauma he and his colleagues and customers endured on May 14 at a Tops grocery store in predominantly Black East Buffalo will likely haunt him for the rest of his life.

On that day, he said he helped hide customers in a freezer before making a run for the back door as the sound of gunfire approached.

The white teenage suspect, Payton Gendron, has been charged in federal and state courts with multiple counts of murder and hate crimes. He has pleaded not guilty in both cases.

A 28-year-old father of four girls and a son, Steverson is among the Tops employees who returned to work at the store when it reopened in July following an extensive renovation. He said the decision wasn’t easy, adding, “I have to work.”

But he said every day he is in the Jefferson Avenue market is a test of nerves. Any innocuous noise, he said, like a pallet falling over, a grocery cart crashing into something, a customer being rowdy or an alarm going off, can make him “ready to drop to the floor.” There have also been threats against Tops that have been unnerving.

Then there are the constant reminders of that day inside and outside the store. A sidewalk memorial in front still draws prayer meetings and mourners bearing bouquets. A water wall inside the market is a permanent shrine to the lives lost.

‘I thought about the people that were around me’

Raised in Buffalo, Steverson said he is the youngest of 10 children in his family. He said his father died when he was a child and that he spent his adolescence shuttling from one sibling’s home to the other, including short stints in Houston and South Carolina before gravitating back to Buffalo.

“By the time I got to high school, I was like practically on my own,” Steverson said.

At age 16, he said he fathered his first daughter, and had dropped out of school but eventually earned his GED.

“I was just young and living life and didn’t know what steps to take because I wasn’t told how to go about life. I didn’t really know about responsibilities, so that’s what caused me to, like, have kids at a certain age. I didn’t have anybody to sit down and talk to me about life, bills and stuff like that,” Steverson said.

But he said the hard lessons he learned about taking responsibility for raising his own children are what prompted him to help others during the Tops massacre.

“I think, basically, with me not wanting to leave nobody behind is because I’m used to being left,” Steverson said.

On the day of the attack, Steverson said he was working in the carry-out section of the deli in the back of the store. He said he had just returned from an afternoon break when he heard the gunfire, followed by screams.

He said growing up in East Buffalo, he was familiar with the sound of gunfire. Just a few months before he started working at Tops in April, he was driving down a street when someone fired shots hitting his car. Still, he said the sound of the alleged gunman’s AR-15 repeatedly firing was unlike anything he heard before.

“When I was at the deli area, it was already loud and clear enough for me to hear,” Steverson said. “So, I’m like, ‘OK, he’s making his way back here, so we can’t just stay here."”

Steverson said he and a coworker dropped to the floor behind the deli counter. He said he could have immediately run out the rear emergency door, but didn’t when he saw the familiar faces of elderly customers and women “coming towards me … and they were all panicking.”

“I thought about the people that were around me, and that I worked there. I felt that I was the person to guide people,” Steverson said. “So, if it was me as a customer, I would hope that like probably an employee would do the same for me being that they knew the store.”

Steverson said he and a colleague gathered other employees and customers and led them into a freezer in the bakery section adjacent to the deli counter.

“In the freezer with me, I think I had a good eight people with me,” Steverson said.

Among those hiding in the cooler with him, he said, was a woman whose sister had been shot, two young girls and a man with a baby.

As the group waited in the freezer for what Steverson said was about a minute, the gunshots kept getting closer. He said he felt that if they stayed in the cooler, they risked being killed.

“It probably was like up to a full minute by the time I made up my mind to get back out the door,” Steverson said.

When Steverson opened the freezer door, he was greeted by chaos. A stream of panicked people, he said, were running for their lives, headed to the rear emergency exit.

Steverson said he and his colleague cleared the freezer and guided people out the back of the store.

“I just hurried up and opened up the door and let everybody run out,” he said. “Then I finally got a little clear path, I ran out myself.”

Once outside, he said he continued to run down the street, stopping two houses away from the store.

“I did break down outside,” he said upon seeing ambulance crews putting injured people on stretchers.

“I didn’t know what was going on until I saw that. I didn’t know if it was only one person who was injured or two, or something like that,” Steverson said. “Then once it dawned on me it was a lot of people, I was like, ‘So, this was really something crazy."”

John Persons, president of Tops Friendly Markets, praised Steverson’s efforts to save lives in a statement to ABC News.

“We are so happy to have Carlton on our team,” Persons said. “His ability to react under pressure was amazing, and his actions helped save numerous lives that day.”

‘What did he prove?’

The suspected gunman is accused of planning the massacre for months — including traveling to the store, a more than three-hour drive from his home — to sketch the layout and count the number of Black people present, according to federal prosecutors. Prosecutors said the suspect was allegedly motivated by a racist, far-right conspiracy known as replacement theory and he wanted to “inspire others to commit similar attacks.”

“It just put me in deep thoughts. I just feel I’ve been trying to think what did he prove? What did you get out of that or whatever? Or (it) just makes me wonder who else agrees and who feels good about what he did. Like, I just wish I could pick out the people that I knew felt that type of way,” Steverson said.

“I’m just like, ‘Dang, it’s just something else that got thrown on top of my life that I’ve got to deal with forever,"” Steverson added.

He also said the ordeal has left him distrustful of strangers, which can be a flaw in a customer-service industry like the grocery store business.

“If that were to happen again in a public situation, I wouldn’t want to go out the door of my house,” Steverson said. “You’ve got to put your trust in strangers when you go into the public with them. It’s like you never know anybody’s motive or what this person woke up feeling today.”

Steverson said people he helped save and their relatives offered to lend him any support they could.

“I just don’t want people thinking I did anything to want something in return,” Steverson said.

However, he said he was happy to be introduced to the executives of Tops and get to know some of them.

He said he got a surprise offer from store management that he did accept.

A couple of days before the store reopened, while on a walk-through of the renovated market, his managers asked if “I was ready for my new position?”

“They said, ‘You want to be the assistant deli manager?’ I was like, ‘Yeah,"” Steverson said.

Persons told ABC News that just prior to the tragedy, Steverson was up for a promotion to assistant deli manager at his store.

“He started his new job on July 15th and has done extremely well servicing his customers and they love to see him behind the deli counter,” Persons said.

But even the promotion, Steverson said, took him aback.

“I appreciate the recognition and stuff like that and all the opportunities that come from it, but at the same time I was like, ‘Dang, why did it have to happen under these circumstances?’ It makes me not want to accept anything or any type of opportunity due to it coming from this situation. I don’t want to feel like I only got this because of this situation,” he said.

In the immediate aftermath of the mass shooting, Steverson said he didn’t leave his home, which at the time was just a few blocks from the Tops store, for several days.

He said he finally ventured out when he learned coworkers were meeting for group counseling sessions at a library near the store.

“That’s when we all got to like basically talk about what happened. It was all like a blur to me. I didn’t know about certain stuff until people brought it to my attention because it all happened so fast,” Steverson said.

He said at one of the group therapy sessions, he stood up to speak about his experience. A female coworker, according to Steverson, interrupted him to say, “You saved my life.”

“I didn’t even know what to say,” Steverson said. “I just went up to her and hugged her tight.”

Mild-mannered and soft-spoken, Steverson said he initially didn’t think what he did was heroic, saying, “I just thought that I was doing what I was supposed to do.”

He said he is just grateful to be alive, noting it was his third brush with death since 2020. Besides having his car shot at while he was driving, Steverson said he was a passenger in a car crash in December 2020 that left him with nerve damage to his brain, a gash in his head that required 10 to 12 staples, two torn ACLs, two torn rotator cuffs and herniated discs in his neck and lower back.

“I was offered to get disability, but I’m too young to be living waiting on a monthly check to check … and I’m like, I still got all types of opportunities. Like I said, you never know what is going to come to me. I’m not ready to just sit and settle for disability,” he said.

Following the Tops shooting, he started to hear from more people, calling him a hero, including an old friend who thanked him for saving his aunt and another coworker who told him he had saved her life, too.

“After everything that I’ve been through … as I sat there and thought about it, it did have me feeling like, ‘OK, maybe I was here for a reason,” Steverson said. “For the people that I did help and assist, it does make me feel like maybe this is what I was here for. Maybe that was all God’s plan.”

Daughter of ‘hero’ Uvalde teacher: ‘I know she didn’t even hesitate’ to shield students

Timeline: When did officials tell people to evacuate from Hurricane Ian?