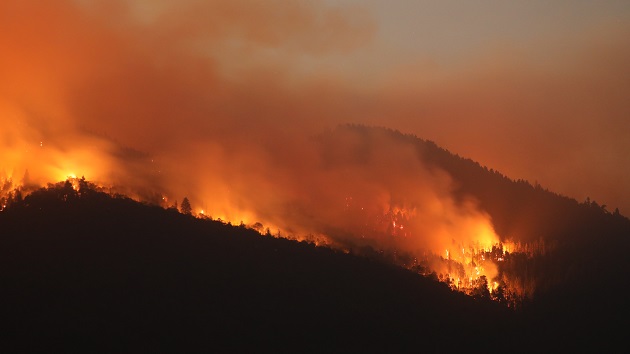 (FRESNO, Calif.) — A wildfire near Yosemite National Park is creeping closer to a grove of iconic sequoia trees that have been in the region for thousands of years.

The Washburn Fire, which originated on Thursday near the Washburn Trail in Yosemite’s Mariposa Grove, has since grown to nearly 1,600 acres and could soon threaten the survival of the sequoias, fire officials said.

The fire is burning in “difficult terrain” due to heavy fuel lingering nearby after a significant tree mortality event from 2013 to 2015, according to Yosemite Fire and Aviation Management.

The fuel consists of both standing trees and fuel that has fallen to the ground and is presenting safety hazards to firefighters, according to Yosemite fire officials.

The Mariposa Grove, one of the most popular destinations in Yosemite National Park and home to more than 500 mature giant sequoia trees, was evacuated and remains closed. People in the community of Wawona, which is surrounded by national park land and campground, were also ordered to leave their homes and campsites on Friday.

No reports of damage to any of the named trees in the grove have been reported. Some of the tree trunks were wrapped in fire-resistant foil, a similar method used in September to protect trees in Sequoia National Park’s Giant Forest when the KNP Complex Fire threatened their existence.

The trees, native to the Sierra Nevada range in California, are adaptive to fire, but intense fire could kill them, according to experts. Wildfires sparked by lightning have killed about a fifth of the 75,000 large sequoias, The AP reported.

The Washburn Fire is not fast-moving and is not impacting human safety, fire sources told ABC News. It will take several weeks for the fire to be fully extinguished because firefighters are managing the fire by setting off backfires to clear the fuel, the experts said.

A warming trend is forecast in the region over the next several days, but high wind events are not expected to exacerbate the wildfire.