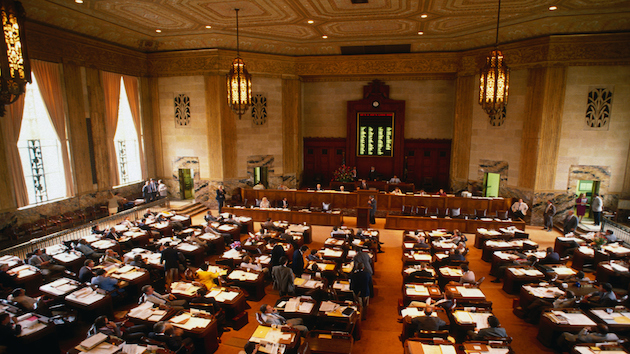 The ABC News/Ipsos poll, which was conducted by Ipsos in partnership with ABC News using Ipsos’ KnowledgePanel, found that 62% of Americans oppose such legislation, while 37% support it.

The results show lopsided disapproval for laws like the one that recently passed in Florida that limits what elementary school classrooms can teach about sexual orientation and gender identity. Republican Gov. Ron DeSantis has expressed support for the bill, which awaits his signature or veto.

The ABC News/Ipsos poll found that Republicans are more likely to support legislation that would prohibit classroom lessons about sexual orientation or gender identity in elementary school, with 61% of GOP identifiers supporting it compared to only 20% of Democrats and 35% of independents.

Support for this type of legislation increases with age, but doesn’t reach majority support in any age group. Among those 65 and older, 43% support the ban, while it falls to about a third among those under the age of 50.

Results were not significantly different by education level. Sixty-five percent of respondents with a college degree oppose such legislation, while 60% of those with a high school education or less also oppose it.

The poll was conducted days after Florida’s state legislature passed the Parental Rights in Education bill. Under the legislation, dubbed the “Don’t Say Gay” bill by LGBTQ activists, lessons “may not occur in kindergarten through grade 3 or in a manner that is not age-appropriate or developmentally appropriate for students in accordance with state standards.”

Parents would be able to sue schools or teachers they allege to have discussed these topics under the bill, which would go into effect on July 1 if enacted.

The bill has drawn national attention, with President Joe Biden, a Democrat, calling it “hateful.” LGBTQ activists and advocates have harshly criticized the measure, saying it would harm queer youth by shunning representation and inclusion from classrooms and erase the presence of the LGBTQ community. Proponents of the bill say such discussions should be left to parents.

Similar measures are being considered in several other states this year.

In Georgia, the Common Humanity in Private Education Act, introduced last week, would prohibit private school classrooms from discussing sexual orientation or gender identity in primary grade levels “or in a manner that is not appropriate for the age and developmental stage of the student.”

In Indiana, a bill introduced earlier this year would require teachers to obtain parental consent before teaching human sexuality — including sexual identity, sexual orientation and “transgenderism” — to students under the age of 18.

An Oklahoma bill advancing through the state Senate would ban public schools and school libraries from stocking books that are about “the study of sex, sexual lifestyles, or sexual activity.”

This ABC News/Ipsos poll was conducted using Ipsos Public Affairs‘ KnowledgePanel® March 11-12, 2022, in English and Spanish, among a random national sample of 622 adults with an oversample of LGBTQ+ respondents weighted to their correct proportion in the general population. Results have a margin of sampling error of 4.4 points, including the design effect. Partisan divisions are 27-26-40%, Democrats-Republicans-independents. See the poll’s topline results and details on the methodology here.

Perry won’t recuse himself from possible GOP investigation of Jan. 6 probe investigating him

Longtime partner of officer who died after Jan. 6 files wrongful death lawsuit against Trump, others