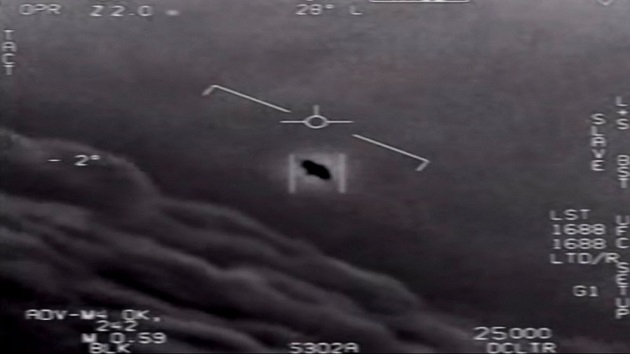 (NEW YORK) — The enduring debate about whether UFOs are caused by extraterrestrial beings will once again be front and center next week as U.S. intelligence agencies will provide Congress with an updated report on UFO incidents over the past year.

Meanwhile, it appears that other more recent incidents are being attributed to weather balloons, other airborne clutter, and foreign surveillance, according to a U.S. official.

Director of National Intelligence Avril Haines has until Monday to provide Congress with its first annual unclassified update on Unexplained Aerial Phenomena, the new term for UFOs, that includes all new UAP incidents over the past year and any previously unreported incidents.

The report was required by the 2022 Defense Bill that mandated that the DNI provide an annual declassified update and a classified annex by Oct. 31 of every year through 2026.

The update follows the DNI’s first-ever report released in June 2022 that listed 144 UAP incidents, only one of which could be explained. At a congressional hearing earlier this year Pentagon officials said that the number of UAP incidents under investigation had risen to more than 400.

While it is unclear how many new reports will be included in the upcoming update, a U.S. official told ABC News that the most recent UAP incidents can be explained as a mix of weather balloons, airborne clutter, and foreign surveillance. But the official stressed that other incidents still cannot be explained.

The official added that it cannot be determined who is behind the foreign surveillance but the most likely candidates would be China and Russia since they have the most interest in monitoring the U.S. military.

“There is no single explanation that addresses the majority of UAP reports,” Sue Gough, a Defense Department spokesperson, said in a statement. “We are collecting as much data as we can, following the data where it leads, and will share our findings whenever possible. We will not rush to conclusions in our analysis”

“In many cases, observed phenomena are classified as ‘unidentified’ simply because sensors were not able to collect enough information to make a positive attribution,” said Gough. “We are working to mitigate these shortfalls for the future and to ensure we have sufficient data for our analysis.”

Analysis of more recent UAP incidents is helped by the amount of information and data available as compared to older incidents.

The U.S. official told ABC News that two of the three videos declassified by the Pentagon in 2020 and recorded from the sensors aboard fighter aircraft now have plausible explanations.

In the “Go Fast” video Navy pilots are heard exclaiming how fast an object is moving above the water. According to the U.S. official, the leading assessment from experts is that what the pilots saw on their video screens was actually an optical illusion of an object that was not moving very fast at all. The illusion was created by the angle and height at which the object was viewed by the sensors as it moved above the water.

The “gimbal” video taken in 2015 by a jet fighter crew that shows an object rotating in the clouds. The official says it’s now believed that the object’s strange movements and observed spinning was caused by the sensor aboard the plane that captured that image.

There is no assessment for what is being seen in the third video commonly referred to as the “Flir” video that was taken in 2004.

The general public’s appetite for UFOs is sure to continue, and just last week NASA announced the 16 people who would serve on a new panel tasked with studying UAPs. Their report, based on unclassified information, is slated to be released in mid-2023.