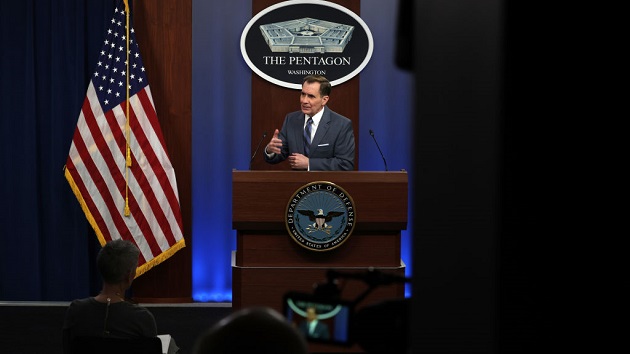 Here are highlights of what a senior U.S. defense official told reporters on Monday:

On Sunday, Russian long-range bombers launched “more than a couple dozen” cruise missiles at a western Ukrainian training facility near Yavoriv, about 10 miles from the Polish border. All of the missiles were launched from Russian airspace, damaging at least seven buildings, according to the official.

The attack left at least 35 dead and 134 wounded, according to Ukrainian officials.

Russia also hit two airfields in western Ukraine on Friday in the towns of Lutsk and Ivano-Frankovsk.

During a Monday press briefing at the Pentagon, press secretary John Kirby said the strikes in western Ukraine are part of a broadening Russian assault across Ukraine.

“I wouldn’t think that that we would consider this or the other strikes in western Ukraine as some sort of turning point,” Kirby said, but adding, “The Russians clearly are expanding some of their targets sets.”

While there were 150 Florida National Guardsmen training Ukrainians on part of the base as recently as February, all U.S. troops and contractors were pulled from the country before the beginning of the invasion.

The strike occurred after the Kremlin claimed arms shipments to Ukraine are “legitimate targets,” but the U.S. official said no security assistance sites were hit in this case.

Kirby confirmed the training center was not being used to funnel U.S. weapons to Ukrainian forces.

“I would just tell you that we have multiple routes to get security assistance into the hands of the Ukrainians,” Kirby said.

In total, Russia has now launched more than 900 missiles against Ukraine, according to the senior U.S. defense official. This estimate is up from 810 on Friday.

“I would just say that we’re going to watch that very, very closely. And as others in the administration have said, if China does choose to materially support Russia in this war, there will likely be consequences for China,” the official said.

“Almost all of Russia’s advances remain stalled,” the official said.

Kyiv: The Russians closest to Kyiv are still near Hostomel Airport to the northwest, about 9 miles (15km) from city center. Some troops are moving in behind those advance forces, “but not at a great pace,” the official said.

The forces approaching from the east are still about 12-19 miles from the heart of Kyiv, according to the official. This was the same estimate given by the official on Friday.

“No real progress to speak to,” the official said of these forces.

They’re facing heavy resistance from the Ukrainians. The U.S. assesses the defenders still have control of Brovary, just east of the capital, where in videos published last week we saw a column of Russian tanks hit.

The U.S. sees a new line of advance with 50 to 60 vehicles moving from the southwest of Kharkiv down toward the town of Izyum.

“The assessment is that they are trying to block off the Donbass area and to prevent the flow westward of any Ukrainian armed forces that would be in the in the eastern part of the country, prevent them from coming to the assistance of other Ukrainian defenders near Kyiv,” the official said.

Mariupol: The city remains isolated and under heavy bombardment, with Russian forces to the north and east. Ukrainians continue to fight back, the official said.

Mykolayiv: Russian forces remain roughly where they were Friday, about six to nine miles northeast of the city. Ukrainians continue to resist.

It is unclear what the Russian plan is for Mykolayiv.

“It could be a left turn to move on Odessa from the ground or it could be they go north up towards Kiev,” the official said.

Odessa: The Pentagon still sees no sign of any looming amphibious assault on Odessa, according to the official.

“The Ukrainians, as we’ve said all along, they’ve been quite creative here. They’re not simply going after combat capability — tanks and armored vehicles and shooting down aircraft — although they’re doing all that. They are also deliberately trying to impede and prevent the Russians’ ability to sustain themselves,” the official said, citing the long Russian convoy as one example.