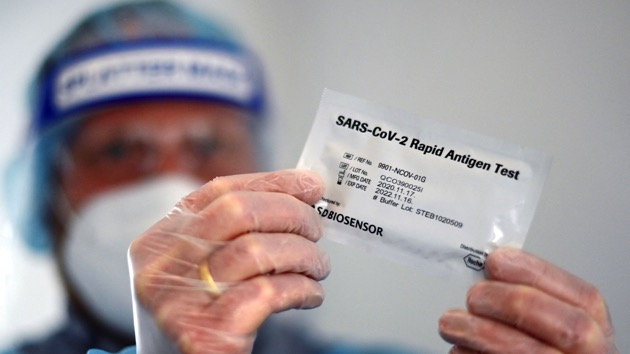 (WASHINGTON) — President Joe Biden detailed further steps his administration will take to slow the spread of omicron in an address to the nation on Tuesday, including an effort to distribute 500 million free at-home rapid tests to Americans next month, dispatch military members to overburdened hospitals and continue the push to vaccinate and boost all Americans.

“I want to start by acknowledging how tired, worried and frustrated I know you are,” Biden began in his address to the nation from the White House. “For many of you, this will be the first or even the second Christmas we look across the table to see an empty kitchen chair.”

He acknowledged that the highly transmissible omicron variant, which became the most dominant COVID strain in the country Monday, was raising concerns just as travel kicks off at nearly pre-pandemic levels for the holiday season.

“If you’re not fully vaccinated, you have good reason to be concerned,” Biden said. “Almost everyone who has died from COVID-19 in the past many months has been unvaccinated. Unvaccinated.”

“If you are vaccinated and follow the precautions that we all know well, you should feel comfortable celebrating Christmas and the holidays as you planned it,” he said.

But he also acknowledged the risks of higher breakthrough cases in the weeks and months to come, stemming from omicron’s many mutations able to escape vaccine protections.

“Because omicron spreads so easily, we’ll see some fully vaccinated people get COVID, potentially in large numbers. There will be positive cases in every office, even here in the White House among among the vaccinated,” he said.

“But these cases are highly unlikely to lead to serious illness. Vaccinated people who get COVID may get ill, but they’re protected from severe illness and death. That’s why you should still remain vigilant.”

Still, the president rejected the idea that the U.S. would go back to March 2020 or impose new lockdowns.

“The best thing to do is get fully vaccinated and get your booster shot — and no, this is not March of 2020. Two hundred million people are fully vaccinated. We’re prepared. We know more. We just have to stay focused,” Biden said.

In his ongoing push to get hesitant Americans vaccinated and boosted, Biden also mentioned that former President Donald Trump this week said he had gotten his booster shot.

“Maybe one of the few things he and I agree on,” Biden said.

He also gave the Trump administration a nod on vaccine development.

“Let me be clear, thanks to the prior administration and our scientific community, America was one of the first countries to get the vaccine,” Biden said. “Thanks to my administration and the hard work of Americans, we led a rollout that made America among the world leaders in getting shots and arms.”

Biden’s newest efforts on omicron, from more testing to help for strained hospitals

Part of Biden’s latest efforts will be free at-home rapid tests delivered by mail to Americans who request them, the president said, marking a slightly different approach from European countries that chose to send tests to all residents.

The move is a significant departure from the White House’s posture just two weeks ago, when White House press secretary Jen Psaki dismissed the idea of mailing tests to every American as costly and wasteful.

“Should we just send one to every American?” Psaki told a reporter on Dec. 6.

But the effort shows the consensus among White House officials on the need to improve the nation’s testing apparatus, which was caught unprepared by the perfect storm of high demand for pre-holiday testing and a surge of omicron cases.

As a result, Americans have faced long lines and empty shelves this week as they attempt to safely gather for the holidays in keeping with CDC guidance, which calls for families to use at-home rapid tests as an extra layer of prevention before gathering.

Fielding questions after his remarks, Biden rejected suggestions that it was a failure to not have the tests readily available in advance of the holidays.

“No, it’s not a failure, but the alarm bell went off. I don’t think anybody anticipated that this was going to be as rapidly spreading as it did,” he said.

But experts have long been warning that new variants are always on the horizon. Since omicron was detected last month, many have urged the Biden administration to move away from a strategy that solely prioritizes vaccination and to beef up other prevention measures, such as testing or mask mandates.

“Scientists have been warning about the potential for new variants to come along for a year now or more. And we’ve known about omicron since the day before Thanksgiving. It’s been weeks at this point,” said Dr. Sam Scarpino, managing director of pathogen surveillance at the Rockefeller Foundation and a member of their Pandemic Prevention Institute.

Biden outlined other efforts in his speech on Tuesday, too, including new federal testing sites around the country — the first several of which will launch in New York City by Christmas — and mobilizing 1,000 military doctors and nurses to overburdened hospitals.

The military aid will be five times the current deployment and could be a big boost to hospitals that have been running on fumes for two years.

There are currently 175 troops deployed over four states, and since August 2021, when a joint military operation across the Army, Navy and Air Force began, about 530 medical military personnel have been deployed to work alongside civilian health care providers.

Tuesday marked the second time Biden had addressed the nation about the omicron variant in less than a month.

In November, Biden announced a winter COVID plan that included setting up more vaccination and booster clinics to encourage more Americans to get protected and increase testing by getting insurance companies to reimburse the cost of at-home tests.

The 500 million free at-home tests announced on Tuesday will be in addition to getting at-home tests reimbursed, which will go into effect on Jan. 15.

“I know you’re tired. I really mean this, and I know you’re frustrated. We all want this to be over. But we’re still in it,” Biden said Tuesday, closing out his speech. “This is a critical moment. But we also have more tools than we’ve ever had before. We’re ready. We’ll get through this. As we head into the holidays, I want us to all keep the faith.”