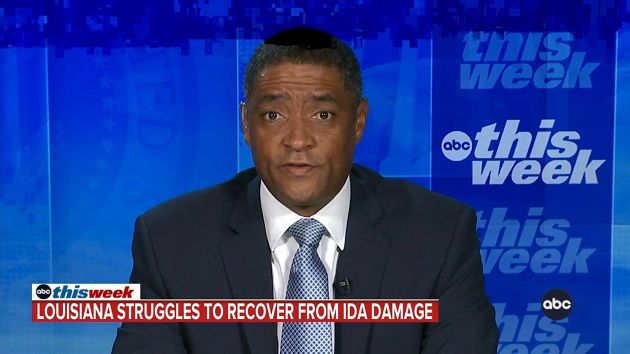 (WASHINGTON) — Faced with new opposition to his domestic agenda from a key Democratic senator, one of President Joe Biden’s top advisers said the White House is “still full steam ahead on trying to get our legislation passed.”

“Look, Senator Manchin is a valued partner, we’re going to continue to work with him, but we’re also going to continue to push our agenda,” senior adviser to the president Cedric Richmond said on “This Week” Sunday, pressed by anchor George Stephanopoulos on how it will pass without the senator’s support.

“It’s not abnormal for this to happen in the legislative process … we’re still full steam ahead on trying to get our legislation passed,” he added.

With Congress set to return from recess next Monday, the fate of the president’s agenda is uncertain after moderate Sen. Joe Manchin declared in an op-ed Thursday that he would not support the $3.5 trillion budget resolution that Democrats alone, including Manchin, took the first step in passing last month through a process called reconciliation. Manchin called for a “strategic pause” on that bill, which contains many of Biden’s “human infrastructure” priorities, including health care, child care and revamping the nation’s energy sector to address climate change.

With significant Republican support, the Senate has also passed a $1 trillion traditional infrastructure bill, but progressive Democrats have threatened to try to tank the smaller package if the $3.5 trillion bill is not also passed.

Richmond cited Hurricane Ida, which caused over one million customers in Louisiana to lose power while killing at least 67 people across eight states, as evidence the United States needs to both invest in its infrastructure and in combating climate change. Richmond, a former congressman for Louisiana, accompanied the president to his home state to survey storm damage Friday.

“People should see now more than ever, how important it is to have resiliency and to shore up our electrical grid and invest in our infrastructure,” Richmond said. “These once in a century storms are starting to come almost every other year they’re bigger, they’re stronger they wreak more havoc. … people should see what the climate change is doing, and we’re going to address that.”

The latest ABC News/Washington Post poll showed Biden’s job approval underwater at 44%, down six points since late June as he faces broad criticism for his handling of the U.S. withdrawal from Afghanistan. Pressed by Stephanopoulos on whether this would make it harder for Biden to get his legislative priorities passed, Richmond brushed the figures aside.

“No, I don’t think so. I think what really will happen is people will start to realize what we need, the challenges that we’re facing,” Richmond said, citing COVID-19 and the hurricane. “We’re meeting the challenges and I think people appreciate that. Does it always bear out in poll numbers? Maybe, maybe not. … This has never been a president who worried about himself. He really worries about the country, so we’re not worried about polling numbers.”

Richmond also weighed in on the president’s response to Texas enacting the most restrictive abortion law in the nation, banning nearly all abortions after about six weeks. Similarly restrictive bills have been struck down by the courts, but the Supreme Court refused to immediately block Texas’s law, which has an unprecedented enforcement mechanism that puts the onus on everyday Americans rather than the government.

“We’re going to do everything we can to try to remedy that situation for people in Texas. It is just a cruel and destructive law on the rights of women,” Richmond said.

Biden has tasked the Department of Justice to look into the law, and also Health and Human Services and the White House Gender Policy Council to look at other options the administration can take to guarantee women still have the right to get a safe abortion, as established by the precedent set by Roe v. Wade, Richmond said.