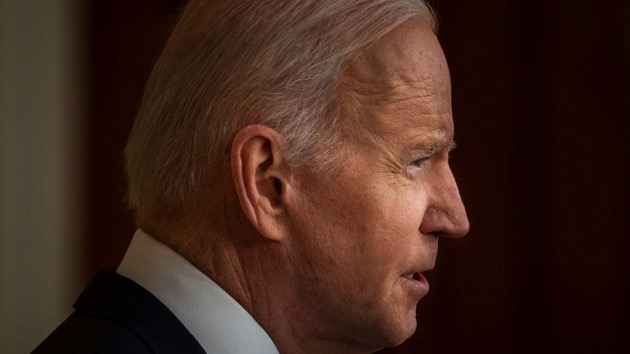 Biden said in an address Thursday that NATO would meet to “affirm our solidarity and to map out the next steps we will take to further strengthen all aspects of our NATO alliance.”

He also announced escalated sanctions to correspond with the escalated Russian aggression, but not the full economic punishment Ukraine and others have called for and none yet on Putin himself, although he did say that option was “not a bluff. It’s on the table.”

“He has much larger ambitions than Ukraine,” Biden warned of the Russian leader. “He wants to, in fact, re-establish the former Soviet Union. That’s what this is about. And I think that his ambitions are completely contrary to the place where the rest of the world has arrived.”

Pressed on why the U.S. hasn’t gone further with sanctions, Biden said that some decisions must be made in unison with European allies — signaling more sanctions may follow Friday’s meeting of NATO’s 30 member countries.

“The sanctions that we are proposing on all their banks have the equal consequence, maybe more consequence than SWIFT, number one. Number two, it is always an option but right now that’s not the position that the rest of Europe wishes to take,” Biden said, referring to an international messaging system that allows large financial institutions to send money to each other.

NATO Secretary-General Jens Stoltenberg is set to offer public opening remarks on Friday and hold a news conference at the conclusion of the meeting, both of which will be live-streamed on ABC News Live.

Biden reiterated on Thursday that U.S. troops would not be involved in the fight against Russia in Ukraine, but he did announce that he will deploy more forces to Germany, including some of the 8,500 troops in the U.S. that have been on a “heightened alert,” and said he is open to sending additional troops elsewhere in Europe.

“Our forces are not going to Europe to fight in Ukraine but to defend our NATO allies and reassure those allies in the East,” Biden said. “As I made crystal clear, the United States will defend every inch of NATO territory with the full force of American power.”

Throughout the crisis, Biden has maintained U.S. involvement is about fulfilling a responsibility to defend NATO allies — and democracy around the world.

“America stands up to bullies,” Biden said Thursday. “We stand up for freedom. This is who we are.”